Appearance
Very deep polished mahogany with copper glints fading to amber at the rim with some green.
Nose

Enormous nose, super fragrant and intense with a wonderful and concentrated mix of toasted nuts and dried fruits with traces of bitter orange peel, cinnamon and antique polished furniture. It has a gentle sweetness to it giving it a charm and instant appeal which belies its seriousness below the surface. So many nuances have melded together to form an exquisite bouquet.
Palate

Massively structured and concentrated at first with amazing grip and lots of tannin but when the tsunami subsides you are left with beautiful flavours which linger almost eternally. It is very sapid with lots of oak, nuts, exotic spices and a fair amount of glycerine which takes the edge of the dryness. This is fantastic.
Comments

Before it was even launched this wine scored 96 Parker points. The labelling is classic and almost identical to that of the original firm, the rights to which were bought by Willy Pérez and Ramiro Ibáñez from Beam Global in 2017. It simply states "La Riva Oloroso Balbaina Baja" without any indication of what a blockbuster this wine is. Anyway the plan is to sell the highest possible quality wines which can be found or produced, and they are off to a good start. This Oloroso originated in the Fabuloso solera of the now disappeared bodega of Cuvillo & Cia. in El Puerto de Santa María and the soleras were refreshed with wine from their two vineyards El Limbo and Santa Ana, both in the pago Balbaina Baja. When the crisis of the 1980s hit the firm they were forced to pay off an architect in the form of wine and when Willy and Ramiro came across it there was a little 12 butt solera which had not been refreshed in nearly 40 years. Transpiration losses had left the butts half empty so they selected those in best condition and which were most typical of the style of Balbaina Baja Oloroso as it had been before the 1970s. The vineyard was about 8 km from the coast and at about 55 metres elevation on albariza soil. The yield at the time was some 5,000 kg/ha, much lower than now, and the grapes were sunned for 48 hours. The wine was fermented in butts and went through 3 criaderas and a solera. The wine has an average age of between 70 and 80 years. Naturally the quantity is tiny and only 1,300 half bottles were filled in September 2017.
Price
96.15 euros per half bottle, Licores Corredera 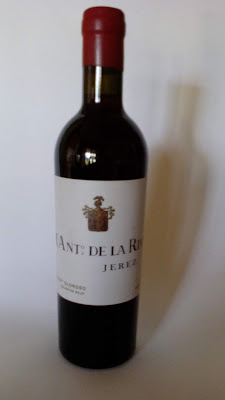