M Antonio De la Riva SA is a highly respected but long disappeared Sherry Brand which has been given a new lease of life, revived by local superstar oenologists Willy Pérez and Ramiro Ibáñez, who have bought the rights from Beam Global who had acquired them in 2017 along with the purchase of Domecq from Pernod Ricard. Domecq had acquired De La Riva in the early 1970s, and also Agustín Blázquez, quite possibly to boost the firm’s value in an effort to avoid takeover by Rumasa. 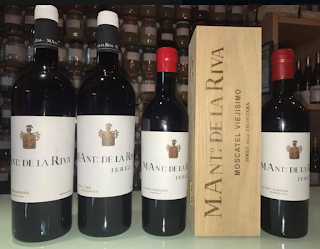 This new incarnation of the company was registered in 2017 as Bodegas De La Riva SL. Willy and Ramiro are making wines from grapes grown in the historic pagos like Macharnudo and Balbaina which supplied the original La Riva brands like Fino Tres Palmas, Viña Sabel and Fino La Riva. Their new Fino is sourced from the Balbaína Alta. Wines will be made in the old fashioned way and sold under this famous brand name, with labels similar to the originals. 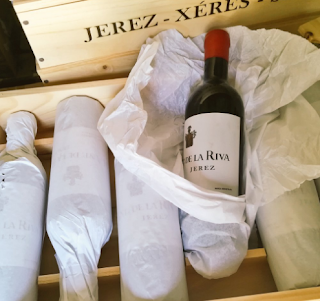 In the meantime they are selling a stunning white table wine made from grapes bought in from the El Notario plot in the Majuelo vineyard in the pago Macharnudo (400 bottles) and tiny quantities of fabulous old wines they have come across: Moscatel Viejísimo Loma Baja (98 RP) the original Moscatel Pico Plata Añejo made by Florido Hermanos and saved from the sale of the bodega to Domecq in the 1970s, and is extremely old (over 80 years) and amazingly concentrated and thus only available in 120 half bottles, which is all the wine there was. Francisco Yuste now owns and markets the brand but not the original wine. Oloroso Viejísimo Balbaina Baja (96 RP), a quite outstandingly fragrant and concentrated old wine, again available only in half bottles, with a first saca of 1,300. This wine comes from a selection from twelve butts from a now lost Cuvillo solera which were used as payment, during the crisis of the 1980s, to a Jerez architect who had kept them at his home for 40 years without refreshing them, concentrating the wine considerably.and a quite outstanding Fino Balbaina Alta  (92 RP) with a few hours of sunning and 10 years of solera ageing (1,500 bottles). These are all stupendous wines, but available in painfully limited quantities.