Appearance
Mid depth antique polished chestnut to amber with a trace of green at the rim and amber highlights.
Nose
Refined and elegant with beautifully assimilated aromas, or rather nuances, of toasted almond, Sherry, oak, vanilla, cinnamon and orange peel. All these have melded seamlessly over 20 years into a complex and beautiful bouquet which is still very much Jerez in character.
Palate
Clean and dry with  a fair impact up front, then it opens out and mellows into that delicious complexity above and there are also traces of dried fruit, nuts and fine Sherry. It has terrific length and is so good that it should be enjoyed on its own, slowly, with a good book.
Comments


Lieutenant-general of the Spanish navy, Joaquín Manuel de Villena Guadalfajara was ennobled as Marqués del Real Tesoro by King Carlos III in 1760 for using his own silver for making cannonballs to fight off pirates at sea and defend the King's treasure. His grandson founded the bodega in 1897 having bought the soleras of the Conde de Villacreces and it has long had a fine reputation for its Sherries and Brandies. The firm was bought by Jose Estevez in the 1980s. This excellent Solera Gran Reserva comes from a solera established in 1897 and it is a blend of carefully selected holandas distilled in pot stills and aged for at least 20 years in butts seasoned with Amontillado.
Price
32,50, Licores Corredera 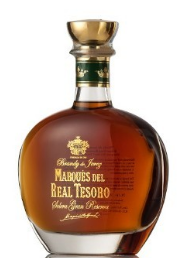