This was a unique tasting of wines stored at the bodega San Ginés which forms part of the building which is the seat of the Consejo Regulador. The institution's President, Beltrán Domecq, and Director, César Saldaña, imparted this fascinating tasting of the wines which since 1948 have been made from grapes trodden by foot on the steps of Jerez Cathedral as one of the central acts of the Fiesta de la Vendimia, which was established in that year. Construction of the Cathedral was paid for by a tax on wine, showing how closely linked they are. 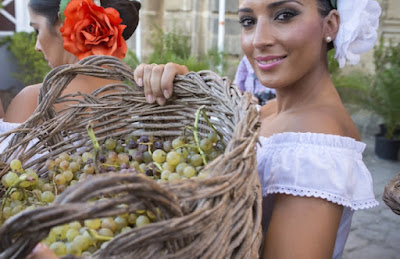 Every year girls in traditional costume bring baskets of grapes supplied by a particular bodega, whose winemaker will be the "Capataz de Honor" for that year, to a lagar erected on the Cathedral steps and they are trodden by a team of men, again in traditional costume, including "zapatos de pisar" or special treading boots. The must runs into a butt which when full is taken back to the bodega where it is vinified and sent off to San Ginés where it will age as a vintage wine. Here there is no solera and no refreshment and the wines simply age statically and oxidatively, so nearly all end up in the style of Oloroso, slowly and inexorably gaining greater concentration through the "merma" or shrinkage through the transpiration of water, but every one will be different. 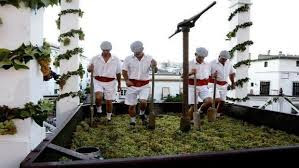 This concentration was evident at the tasting with some incredible alcohol, sugar and volatile acidity (VA) readings, and yet the wines were delicious and somehow balanced, though very powerful, and none was too astringently woody. The lowest alcohol reading was 23.1% while the highest reading in the Consejo's own broad guidelines for Oloroso is 22%. While the wines were, without exception, huge up front, they generally subsided into balanced and intensely flavoured treasures, lingering eternally on the palate. It is worth noting that all the following wines contain way beyond the level of VA acceptable in most wines, but just laugh it off. Sherry is unique and special.


The butts at San Ginés are not all from the Fiesta de la Vendimia. Some are laid down in celebration of visits to Jerez by important personages such as royalty or Poets Laureate (whose payment is traditionally a butt of Sherry) while others are  butts donated by bodegas, some of which no longer exist, offering a fascinating liquid heritage. Many were dedicated in the early years to local towns, and later to places or occasionally people farther away. The heads of the bodega butts display their coat of arms or logo and are a beautiful sight.

Anyway, there follows a list of the wines tasted and some details. Sorry about the picture quality but most were snapped on a mobile from a screen. 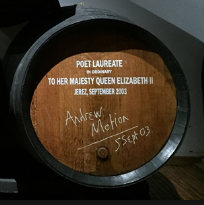 Bota de los Príncipes de Asturias
Dedicated to and signed by Don Juan Carlos de Borbón and Doña Sofia in 1971 before Don Juan Carlos became King in 1975 after the death of Franco. It is not known which bodega made this wine, but it is over 50 years old with 26% alcohol, 6 g/l sugars and 1.9g/l VA. TA 9.75 and pH 3.03 Powerful, oaky, spicy, grippy. 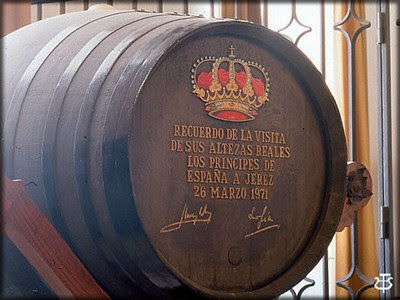 Bota Fiesta de la Vendimia 1970
Dedicated to Canada , the bodega is not known but the Capataz de Honor was Salvador Diaz Lacave, so it could possibly be traced. Powerful and grippy despite damp, coolish spring, sugar barely noticeable. 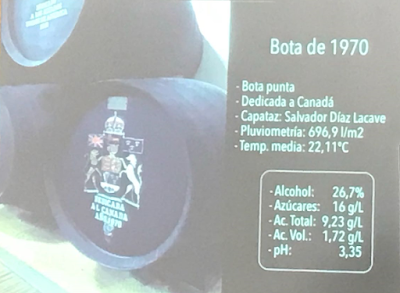 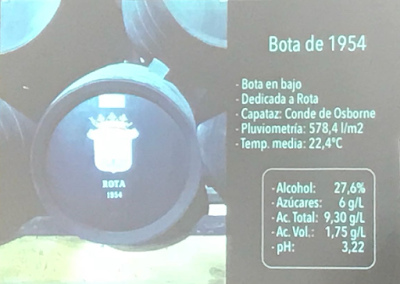 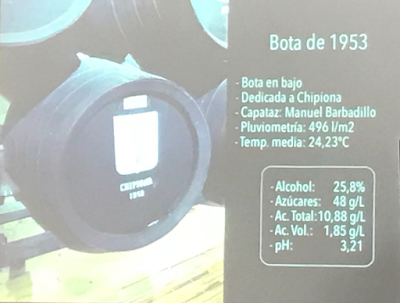 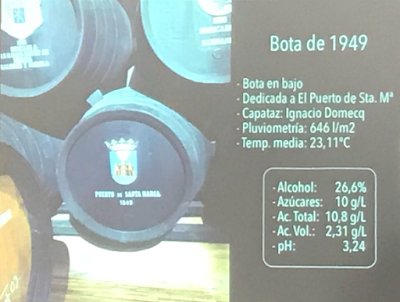 Bota Fiesta de la Vendimia 1948
Dedicated to Don Luis Romero Palomo, founder and first president of the Fiesta de la Vendimia. The vintage suffered from drought and temperatures were average. An outstanding, super elegant and refined wine, possibly Palo Cortado.  Beltrán Domecq said it was probably the best Sherry he had ever tasted - and he has tasted a few. 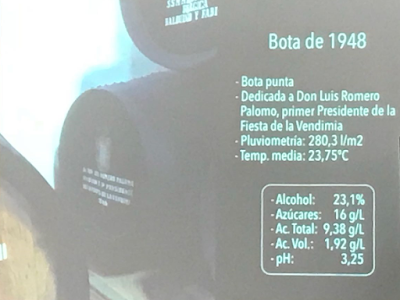