Appearance
Deep burnished mahogany with bright copper glints and a hint of green at the rim.
Nose

Fragrant and very complex, deep with the concentration of age and a little tight. Lots of toasted nuts with traces of iodine,salt, old oak and faint notes of linseed oil, toasted caramel, cinnamon, esparto grass and aromatic woods. There's a lot packed into this little bottle, it is a very serious wine and quite intense but extremely attractive as it opens out.
Palate
It is very full bodied with a fair salinity, some noticeable but gentle oak tannins (the butts are very old) and some volatile and tartaric acidity making it feel very dry with a faint bitter tang. There are some balancing sweeter elements like the toasted nuts and a certain amount of glycerine, but it is still a big well structured wine which lingers for ages on the palate.
Comments

This is the long awaited release of the 40 year old Amontillado from Bodegas Sánchez Ayala (established in 1798) who supplied the wine for the first Equipo Navazos bottling back in 2005: an old Amontillado, though not as old as this, which hadn't been refreshed for many years. It was the nearby navazos (old agricultural plots dug from the sand dunes) which gave the new project its name. Grapes for Don Paco come from the firm's 90 hectares of vineyards in the fincas Las Cañas and La Soledad in Balbaina, and after a period in sobretablas the wine enters the complicated Manzanilla Gabriela solera with 11 criaderas and a solera consisting of a mixture of butts and toneles totalling 46. It then moves to a couple of intermediate butts known as " abuelo" and "abuela" before going to a small solera of 13 butts. Releases are necessarily small, and this was one of only 500 x 50cl bottles or just 250 litres. Despite its age the wine is not VORS as it is just too much hassle and expense for such small amounts, and anyway the wine speaks for itself.
Price
40 euros per 50cl, ex bodega 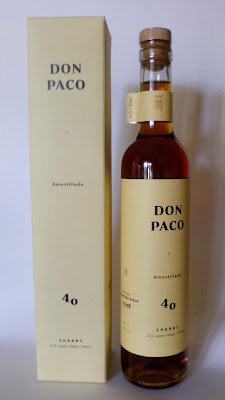