This bodega was founded in 2006 by Vicente Taberner Carsi, from Valencia, on land he had bought in 2001 with the intention of producing great red wine. Vicente, whose family had been connected with wine, had been working in Germany importing Spanish wines but was determined to make his own, and after an intensive search he came upon just what he was looking for, the Huerta de Albalá. 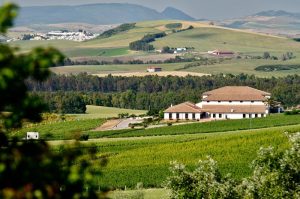 The huerta is located near Arcos de la Frontera, in an area where the Romans made wine.  Here the microclimate is tempered by the Bornos reservoir and the Sierra Grazalema at an average altitude of around 150 metres. The finca extends to 91 hectares of which 75 are planted to vines on slopes running from 100 to 200 metres altitude and separated into different parcels according to soil conditions. The vineyards are planted roughly to 60% Syrah, 20% Merlot, 10% Tintilla and 10% Cabernet Sauvignon. He is also experimenting with Pinot Noir. 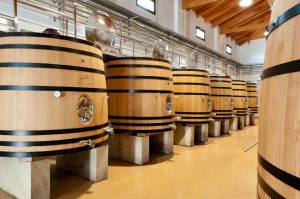 The estate is designed on the lines of a French château, with the bodega surrounded by its vineyards, though the bodega itself is designed more like a traditional Andaluz cortijo. State of the art equipment is used to make wine the old way. Both stainless steel tanks and French oak vats are used for fermentation depending on the wine, and it is all aged in French oak, except the white and the rosé. A new departure was made in 2010 with the acquisition from Osborne of 160 hectares of albariza vineyards with the DO Sherry in the Pago Balbaina. Naturally Palomino was planted here, but Vicente has added some Chardonnay. 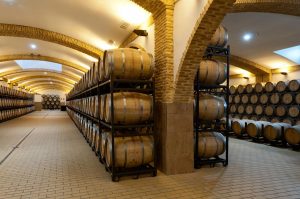