Francisco Yuste: Manzanilla Needs to be Better Known Outside Spain

Where and when did the story of Bodegas Francisco Yuste begin?
I have always been attracted to the world of bodegas since I started working as a very young man with my father. My dream was to one day live in a bodega and I have been lucky enough over the years to be able to realise that dream. My passion for Sanlúcar and Manzanilla drove me to buy up wines from bodegas which were sadly disappearing and to recuperate the bodega buildings which were and still are Sanlúcar’s heritage. What began as a hobby is now a business for which I have high hopes; our wines have a great future.

When did you start adding bodegas to your business portfolio?
Since I bought the first bodega in Sanlúcar in 1989 I haven’t stopped investing in recuperating the town’s bodega heritage, both in wine and in bodegas. The first was the bodega Santa Ana in the Barrio Bajo of Sanlúcar, where I now live with my family, after a refurbishment which took over two years. After that I bought the bodega Los Ángeles in the Barrio Alto and the bodega Miraflores which is close to the Pago which gives it its name. These bodegas are all dedicated to the production of Manzanilla. In Miraflores we also have a brandy bodega where we keep the treasures produced by the lost bodega Pedro Romero, Punto Azul Prestige and Heritage as well as the soleras of Pedro I and the Ponche and solera rum.

In the bodega Los Ángeles we nurture some of the oldest wines in the world; the soleras of the Conde de Aldama which date back to 1740, and in my house, the Bodega Santa Ana, we nurture one of the Manzanillas with the longest ageing under flor in Sanlúcar; Manzanilla La Kika, named in homage to my mother, and which has consistently been winning awards since its launch.

It is not all bodegas though; 20 years ago I bought the Viña Alamedilla, 46 hectares of vineyard in the Pago Carrascal near Jerez which I look after like a garden. The last important investment was the purchase of the historic Bodegas Herederos de Argüeso in 2016, with soleras like Manzanilla La E, probably the Manzanilla most widely consumed in Sanlúcar and which for the moment is only available on draught. And of course the iconic Manzanilla San León, which won the Manzanilla Trophy at the International Wine Challenge. 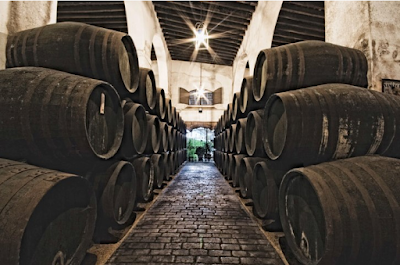 Which would you say is your star product, the one most popular with the public?
The star product is Manzanilla. It is a genuine Sanlúcar product and there are very few bodegas which manage to produce this wine under constant flor all year round. If I had to choose between our Manzanillas Señorita Irene, Aurora or La Kika, I would choose all three, but the wine which is the greatest treasure of those I have rescued over the years is the Amontillado Conde de Aldama, voted best Amontillado Sherry in 2017 and of great pride to us for its Sanlúcar origins. It is a wine averaging over a century of age and represents the maximum such a wine can achieve, and well worth tasting at least once in one’s life. Many people come and visit the bodega from all over the world, attracted by its perfume. There is definitely a before and after when tasting this wine which is derived from Manzanilla.

Which are the most important markets for Manzanilla in the world?
Europe, the United States and Japan are our principal customers, however we have a long way to go with exports. In Spain, sales of Manzanilla alone exceed all the styles produced in Jerez, but this national trend is not reflected in the export markets.

Manzanilla, which has had its own Denominación de Origen for over 50 years, needs specific promotion so that more people outside Spain get to know it, but it is the Consejo Regulador in Jerez which decides on promotional funding. Personally I can’t remember a single promotional campaign abroad specific to Manzanilla, and as we all know, if it is not promoted it just doesn’t exist.

Despite all this, Manzanilla sales continue to grow year on year even though Sherry sales are declining, and this is due to the enormous quality of the wines of Sanlúcar, where biological ageing began.
Posted by Paula MacLean at 11:59