Appearance
Mahogany fading to amber with slight hints of red, legs.
Nose
Quite light and predominantly Oloroso, hints of Oxford marmalade, almonds baked in a cake with cherries, a trace of turron and of course, raisins or perhaps sultanas - not the deeply raisiny aroma of PX anyway. Then there are figs and dates, and maybe a hint of toffee.
Palate
Again quite light, very fruity; lots of fig, date raisin and yet also slightly grippy, some tannin there and a refreshing hint of acidity. There are hints of toast with marmalade and those almonds. Good length and quality, and is ideal for a long drink with ice and a slice of orange.
Comments
This is a classic Cream Sherry consisting of around 10% PX and the rest Oloroso. It is aged for about 6 years. It was, of course, originally a Duff Gordon brand which passed to Osborne when the Duff Gordons sold out. The wine still comes from the original soleras. I thought I would post it since it looks as if they have found the wreck of Columbus' flagship, the Santa Maria, which carried the first Sherry to the Americas.
Price
About 7 euros in Spain. It doesn't appear to be available in the UK. 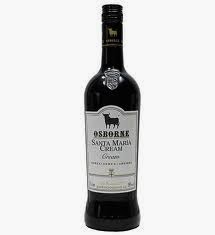