This is a story told by Francisco Jose Becerra in his blog La Sacristia del Caminante, and with his permission I reproduce it here. It is a marvellous tale.

There are two very characteristic and established symbols of Jerez, two emblems closely linked to our idiosyncrasies; the horse, and our beloved Sherry. Nowadays the Jerez festival par excellence which unites these two symbols is the Feria de Mayo (May Fair) also known as the Feria del Caballo (Horse fair).
All symbols come from somewhere, and looking back a bit through history, or in this case legend which is not scientific history but certainly reflects part of it, I came upon the following amazing story.

Let us go right back to the Middle Ages, or more accurately to between the middle and end of the XV century, though other authors such as Jose de las Cuevas give a precise date of 1454. The frontier wars were a nightmare in the daily lives of those who lived in those baneful times. A Moorish army was advancing from Utrera towards Jerez, their raids and sackings were terrible; they burned fields of wheat ready for harvest, destroyed water supplies, vessels full of olive oil, they killed the animals, they took the women and cut the throats of or decapitated men with beards. An eye for an eye, since the Christians would do just the same.

The first to act were the knights of Arcos, but not without first covering their backs by calling on the knights of Jerez. In those days, honour meant the one and absolute truth: a Christian knight’s duty above all was to God and the Church. He drank a lot of wine (Sherry naturally) and ate, where possible, a lot of pork, an insult to the Moors, as the pig was the animal they most hated. In fact inns used to hang up a leg of ham – not to accompany a nice cool glass of Fino, but to show that they were purely Christian.

The battlefield at which they would give the infidel a hiding consisted of hilly land between Arcos and Espera. There, no fewer than 1,500 knights arrived as well as 6,000 Moorish foot soldiers. The Arcos knights were there first, naturally as they lived closer. They prayed then stood to face the Moors, subjects of the king of Granada. Battle commenced, but the Moors had the upper hand while the Arqueños (men from Arcos) held out heroically as they awaited the reinforcements from Jerez. 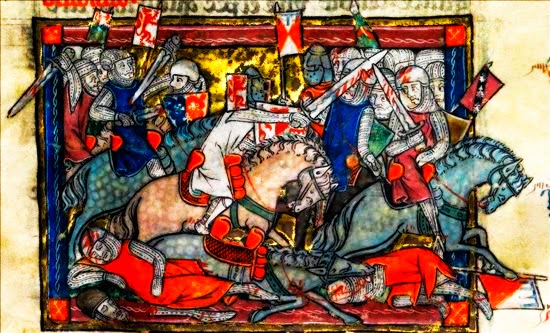 Thirty kilometres away, a badly wounded shield bearer came upon the knights from Jerez commanded by Pedro Nuñez de Villavicencio. His nickname was “El Bueno” (the good), though he was only good by comparison to his son of the same name, nicknamed “El Chiquito” (The Tiny), who was rather rough. It seems that he was a bit of a joker, however, and never shut up even under water, but was nevertheless a whirlwind with a sword, flaying left, right and centre.

Nuñez de Villavicencio sounded the attack, but the horses were exhausted and simply could not get up. Quickly, Pedro ordered that they be given a ration of bread and wine (Sherry, of course), and as this elixir spilled into their troughs they were soon revived. In no time they bolted into action, their knights astride, their raised swords flashing, slashing in all directions. Before long the Moors were forced to disband and fled, giving victory to the Christian knights.

As Alexander Fleming said: “If penicillin saves lives, Sherry can revive the dead.”  Don Pedro Nuñez de Villavicencio knew that centuries ago, and “In situ equus, ferus caballus” (roughly  “instead of a horse, a wild packhorse” ) showed Fleming exactly what Sherry can do.

Legends are just that, legends, but often details can turn out to be true, and it is certain that the knights of Jerez gave their horses bread and wine to invigorate them in battle. A blessed elixir, without doubt.
Posted by Paula MacLean at 15:47