After the success of the interactive online Manzanilla and Fino tasting in January between Cesar Saldaña, director of the Consejo Regulador, and Chelsea Anthon, general manager of International Sherry Week and some restaurateurs in Australia, another tasting is to take place with 60 London restaurateurs in Sevilla.

The tasting is organised by the Restaurant magazine as the highlight of a two day culinary trip. The restaurateurs will unfortunately be unable to visit Jerez, but at least they will be able to see how amazing the wines are. As Chelsea puts it, “I can’t allow such a powerful group to leave Andalucia without tasting the best wines in the world.”

Jesus Muñoz, president of Tabancora, the association of traditional bars in Jerez, has been in London at the invitation of the city’s latest Sherry bar, Drake’s Tabanco. The new establishment, at 3, Windmill Street, Fitzrovia, London, and which only opened last October, serves Sherry from the barrel – with a venencia! They also serve a wide variety of delicious looking Spanish food. Jesus Muñoz was impressed how the staff act as Sherry educators. 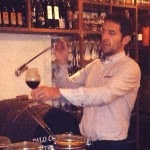 The 2014 Feria del Caballo in Jerez will take place between the 11th and 18th of May. The poster for this spectacular feria has just been revealed at Gonzalez Byass, and here it is, a montage of 2,166 Sherry glasses!

Jerez Brandy sales have seen a sharp fall over the last few years due to various adverse conditions. Sales of the top level brandies actually rose slightly, but those of the cheaper ones have been falling fairly dramatically. Brandy has faced changes in consumer drinking habits, such as the disappearance of the early morning noggin or one after dinner. Gin is seen by the younger drinkers as far more modern and fashionable, along with whisky and rum – and are far cheaper to make. Not only is the raw material (grapes) 3 times the price of cereals or molasses, but brandy needs costly ageing. European Union grants for potable spirits distillation have all but dried up, and recent grape harvests have been very small.

Producers are having to focus on promoting brandy in the export markets, while the domestic market declines. The Brandy Consejo Regulador is looking at changes to the production rules, one of which is that the spirit must have a minimum alcohol content of 36 degrees. Some producers have argued for a reduction, and also to be permitted to sell non-grape spirit under existing brandy brand names. The latter has caused some controversy.

Grupo Estevez and the Sanlucar cooperative Covisan have been celebrating working together. Last Saturday the 167 growers and their families were welcomed at the cooperative bodega by its president, Antonio Palacios, then addressed by Estevez president, Jose Ramon Estevez. He highlighted the history of Estevez, owner of La Guita, its commitment to Sanlucar, vineyard sustainability, quality, and the importance of origin. All the grapes for Manzanillas La Bailora and La Guita come from Sanlucar. A visit to the La Guita bodegas followed, and cooperative members could see the 14,000 butts of Manzanilla stored there. They also saw what happens to the must made at their bodega to transform it into finished wine. Estevez explained the joint project with supermarket Mercadona and their efforts to develop a sustainable agro-alimentary chain. The event shows the strong bond between the cooperative and Estevez, and the latter’s commitment to but most of the cooperative’s produce. 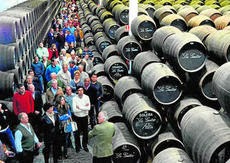