Appearance
Deep amber to burnt umber with coppery tints through yellow to trace green at rim, legs.
Nose
Quite intense, more oloroso with traces of chocolate, coconut, wood with hints just of PX. A serious and very complex wine with dried fruits, roasted nuts and walnut along with traces of leanness from age, largely hidden behind the PX front.
Palate
Full bodied, just off dry, intensely tasty with the odd savoury note. Deep and nutty yet with a softening layer of PX which makes its presence felt without dominating, and balances the harsher woody notes of age. Round and textured, tangy and fascinating with a trace of coffee at the finish.
Comments
This magnificent wine comes from a solera established in 1862 to celebrate the visit to the bodegas of Queen Isabel II. The Queen was keen to see the pressing of the grapes, but as her visit was in October, the harvest was long over. Manuel Maria Gonzalez sent people out to buy any unused grapes they could find and organised a pressing at the bodega of the large quantity they had managed to obtain. The quality of the resultant wine was so good that it was housed in an enormous specially made butt holding the equivalent of 33 butts. This butt, which is still there, was named El Cristo, as Christ was 33 years old. It is flanked by the Apostoles soleras. The solera consists of 12 butts, each with the name of one of the Apostles - except Judas, whose butt is kept in the vinegar store! After 15 years ageing as a Palo Cortado, some of which is sold as Leonor, the wine is transferred to PX butts and slowly absorbs  about 13% of the PX from the butts. Palo Cortado is normally 100% Palomino, but, well this is special.
Price
£17-19 per half bottle. Fairly widely available.UK distributors Gonzalez Byass UK 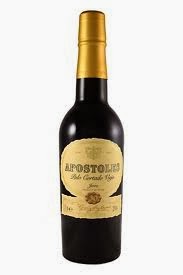