Manuel Baron Fernandez began his career in the wine trade with the acquisition of some old soleras from the Sanlucar almacenista Anselmo Paz in 1895. His wife, Dolores Romero Sanchez, however, came from an old Sherry family, Romero de la Balsa, who had been in the business since the mid XVII century. They were already in the business in 1630 when the Duque de Medina Sidonia led a revolt against Phillip IV, and remained in the business right up to Dolores' father, Rafael Romero. Thus, the newly started bodega could count on centuries of knowledge and experience.

In 1984 the bodega was acquired by businessman Jose Rodriguez Jimenez, and is now run by his two heirs, Juan Luis Rodriguez Carrasco and Jose Rodriguez Carrasco. The bodega is only part of the business which is mainly agriculture and farming. They own three albariza vineyards totalling about 140 ha. in the pagos surrounding Sanlucar; Finca Atalaya, Finca Martin Miguel, the prized Finca El Poedo of 47 ha. on slope looking toward the Guadalquivir estuary, and the 5.7 ha viña El Hato, all farmed organically.

The bodega Molinillos is sited at the lower end of the Barrio Alto facing the river to attract the sea breezes. You can't miss it driving into town. Its central naves date back to 1631, while the rest of the buildings are from 1871. Here the 150 year old plus soleras of Anselmo paz are still guarded, and are still used. There were once coopers here, and wheelwrights for the carts, but they have gone leaving more space for wine. Baron has another bodega complex in Sanlucar, which brings their total to 20,000 square metres and 10,000 butts. 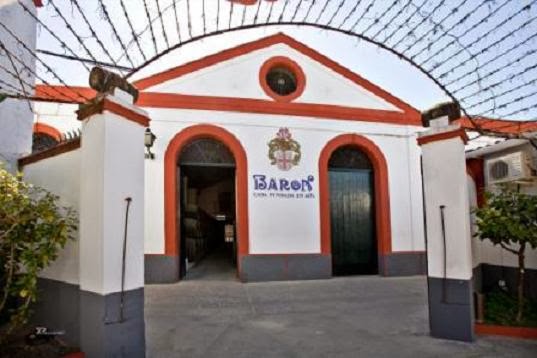 The firm makes a full range of wines, specialising in Manzanilla naturally:

Fino Baron 3 yo
Manzanillas: Atalaya 3 yo; Baron 3 yo; Micaela 5 yo; Manzanilla Pasada Baron (8yo, 15 criaderas)
Amontillados: Atalaya 10 yo; Amontillado Viejo Baron 30 yo
Olorosos: Pino Viejo 3yo; Oloroso Baron 8 yo;
Moscatel: Baron 3yo; 6yo
Cream: Atalaya 3-4 yo
PX: Baron 6yo; Baron 8 yo

In 2014, there are changes to the range: Soluqua, a range of wines never before released, having been reserved for family consumption, and the bodega's top wines, mostly VORS. Xixarito is the new standard premium range to replace the Baron range. Also new labelling has been introduced for all the wines. How's this for design?