A Chat with Pilar Pla of Bodegas Maestro Sierra

Pilar Pla was born in Teruel, but when only a few months old, her family moved to Valencia. There, in the land of rice, she met her husband, Antonio Borrego from Jerez, with whom she fell madly in love. They married and moved to Jerez. Pilar is a slim woman, but strong. She has always worn shoes with heels, even now. "Me with flat shoes? Get away!" Her mind works quickly, full of memories, ideas, projects, but she speaks in a quiet, relaxed way, quiet like her bodega.

That bodega in the Plaza Silos is, according to her, like a workers' meeting, all opinions are respected, ideas weighed up, and if they are good for business, they are adopted. It is unusual, but they know that if it works, they are guaranteed employment.

She loved wine the moment she encountered it. When Antonio died in 1976, she had two options: to continue on his path, or sell up. "At that moment I thought if this had been his life it would be cowardly to throw it away. I did not understand a word about wine, but had at my side a capataz in whom I had confidence, Juanito. We carried on and it worked out well. There's a maxim in the bodegas that if you are willing to learn, then you will learn, and I learned a lot. They would come to me saying "Dona Pilar, what do you think of this wine? I find it a bit acidic, or there's this strange note of something... " I knew how to pick out a wine's defects and virtues. With determination you can achieve anything, well, determination and work - hard work."

Dona Pilar thinks of herself as another resident of "her" little square. Gratitude is reflected in her eyes and a tear appears as she recalls the women of the neighbourhood appeared with chick pea stew or puchero (a country stew of meat stock and vegetables) when her husband died. "Can you believe it? They didn't know me, but they saw me opening the bodega every morning. They said "Dona Pilar, you're so thin, and with so much work to do you won't have time to cook." "My goodness, me without any family here, and all these people bringing me food, I'll be grateful to them for the rest of my life."

While the women of the neighbourhood were looking after her health, the vultures were circling, but in the hardest moments she remained firm, protected by her mother and daughter ("my greatest success!"). She managed to defend Antonio's legacy and avoid being cheated. "When I was widowed, lots of lizards appeared, but I wasn't stupid and put a brave face on it. I learned common sense, and am grateful now."

This common sense has served her well so that Bodegas El Maestro Sierra has not lost its essence, its reputation. She tells of how some American businessmen were stunned when she refused to sell them a large quantity of wine "because it would have drained the criaderas, and I wasn't interested. We care for our patrimony, but some bodegas - I won't say who - are simply there to make money. I believe it is better to earn five and maintain one's reputation, than to earn ten an be discredited. I would rather lose money than prestige," she declares.

For this businesswoman the real perfume of Jerez is the wine. She can't resist saying loudly "Aah! what a smell of wine!" as she passes down streets lined with bodegas, the "cathedrals of wine". This in a city which, despite the terrible crisis, can still earn a crust. "In Jerez there creative spirits because the wine enlightens the brain. There are unemployed people here, but instead of just doing nothing, they go into the countryside and forage edible plants, fruits, snails, which they take home to feed their families. It is a constant struggle. The Jerezano is capable and hard-working, even if some say the opposite," she says.

Asked what it is she so likes about Jerez, she replies "Frankly, I'm not very sure, but authors have been inspired here, befor going on to write their greatest works... it is all to do with the spirit of the wine." She feels very comforted that "at last" Jerez is European City of Wine. "Important historical events were sealed with a glass of Sherry, so it was definitely time," she points out.

Her love of Sherry is such that she simply cannot understand how someone could prefer a cubata (a mixed drink eg rum and coke) "It's outrageous! People are free to do what they like in their own homes, but a Sherry is unarguably better than any other drink. It animates the spirit rather than dulling the senses." 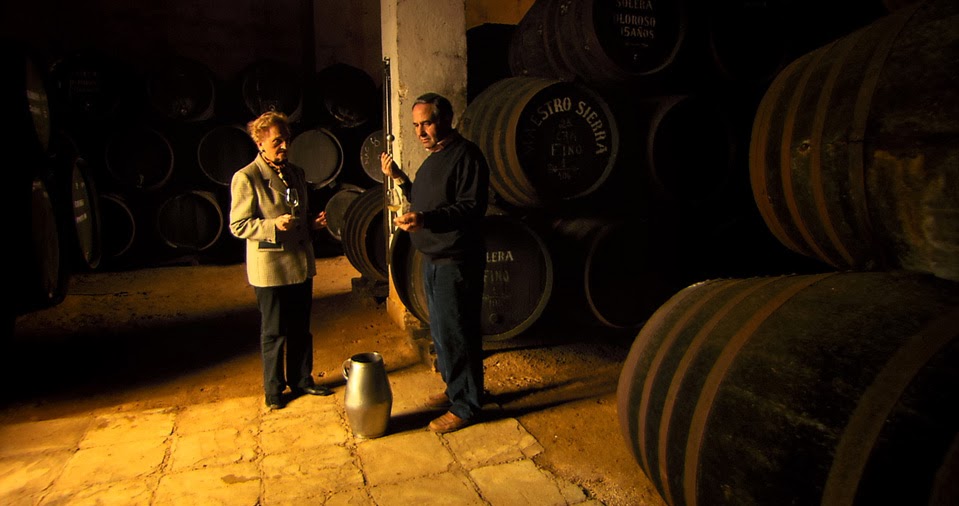 Pilar likes to relax with a good book or music such as Beethoven or Strauss waltzes, she even hums some and moves her arms as if to play a violin. She adores the arts, culture. "In Andalucia there have been many civilisations, and they have all left their mark, so the Andaluces are multifaceted, resourceful.

The person she would most like to share a glass of Sherry with is the Pope. "The wars between religions are the worst, because it is fanaticism. The true history of the Church is the life of Jesus Christ who was a man and who left us phenomenal teachings", she declares. Her views on certain churchmen are less laudatory. "They must take a lot of blame for being ambitious. They want everyone to be in their flock without taking into account that everyone is different, a human being with a God-given brain of their own..., but I should leave it there!"

The best place in the world for her is "Spain, with out doubt. We don't appreciate what we have. Even with family in Catalunya she will have no truck with independence. "They're all mad. Where would they go? It's daft. If we didn't love them so much we should let them go, and collapse, but how would we rescue them?"

Pilar Pla loves Andalucia, she feels a part of it. "An Andaluz with only a slice of bread and a chorizo is happy with his lot. You can't say that about the others. That's patrimony."

(Translated from an interview in Diario de Jerez)
Posted by Paula MacLean at 12:44