The Terry family came originally from Cork in the south of Ireland, and like many at the time, left the financial, religious and political troubles in their homeland for a better life. They were known as the "Wild Geese". After Oliver Cromwell confiscated their Irish estates, William Terry, one of the “Wild Geese” and his family went to France, leaving in 1693 thence via Genoa to Cadiz, and settled there in 1774, working in shipping, as he had done in Italy. Some members of the large - huge - Terry family went to Peru, Venezuela and Cuba, becoming immensely rich from, among other things, sugar plantations. (Tomas Terry y Adan was known as the Cuban Croesus!)

William Terry’s descendants would involve themselves in the wine trade, and Fernando de Terry y Brucet, who was born in Cadiz in 1783, had stocks of maturing wine by 1816 in both Cadiz and El Puerto de Santa Maria, acting as an almacenista. In 1835 Fernando de Terry y Carrera established the firm, but it encountered difficulties and was re-financed and re-established in 1865, forming the company we know now, when he expanded the business into making and shipping wines and brandies. He was succeeded by Fernando C Terry del Cuvillo, who in 1948 bought for the Terry bodegas the Yeguada (stud) del Hierro del Bocado, the most importand breeding stock of Cartujano horses. 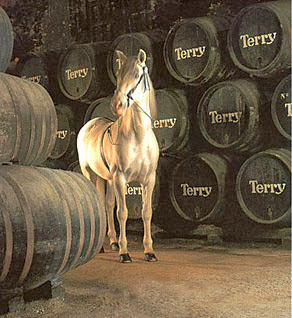 His relation, Santiago Terry was involved with the defence of Cadiz from Napoleon during the Peninsular War. He organised battalions of volunteers, as well as being one of the writers of the famous 1812 Constitucion de Cadiz (known affectionately as “la Pepa”) and there is a Cadiz street (formerly Calle Gamonales, where he was born) named after him.

The Terry bodegas in the Calle Santisima Trinidad were among the most beautiful in the town, built around a patio with ancient olive trees with carved wood interiors in the offices. In the "sacristia" where the oldest wines were kept, there, on the wall, the head of a bull killed by Mazzantini, the only Italian to have ever had success in the bullring. In these bodegas was aged the wine made in their vinification plant on the outskirts of town. Nearby is the Finca San Jose del Pedroso, the stud for the famous Terry horses, the white pure bred Cartujanos, which are stabled in the old bodegas of John William Burdon. The bodegas, El Carmen, La Tribuna, La Maruja have gardens, patios and even a museum of XIX century carriages, evoking the past. 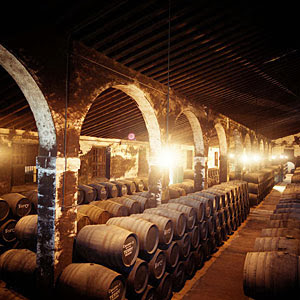 Terry had a good reputation for looking after their employees, and was known as the “social bodega”. They paid women of all ages to “knit” the nets for their Centenario brandy bottles, which brought in a little extra income to hard-pressed families. The yellow net was created with simple tools; a special looped needle, a headless nail and a train ticket!  It was introduced in 1905, with different coloured nets for different brandies. 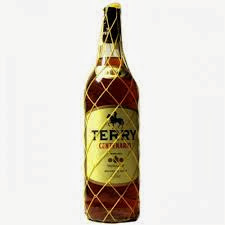 The last Terry in the family business was Fernando de Terry Merello (1935-2009), Santiago’s great grandson, and son of Fernando C de Terry del Cuvillo, mayor of El Puerto de Santa Maria 1941-3. His wife was the daughter of the Conde de Osborne (of bodegas Osborne) Fernando was in charge of the bodegas until 1981, when the business was sold.

During the 1970’s the domestic brandy boom led many bodegas to invest large (borrowed) sums to boost capacity. Terry invested 2,000 million pesetas, half of which was spent on the vinification plant. The world oil crisis of 1974, however, spoiled the party. Borrowing suddenly became much more expensive, and sales were starting to slide. Using the Finca San Jose del Pedroso as collateral, the Terrys raised another 400 million pesetas, but even this did not stem the costs of borrowing and trading losses, and the bodega was sold to two Catalan investment firms, SERVAY (90%) and INPISA-2 (10%) on 11th August 1981.

There was speculation at the time that RUMASA may have been behind the purchase, leading Domecq, Gonzalez Byass and Osborne to form a consortium to defend themselves from the “Little Bee” (the trademark of RUMASA). They were right, it was a front for RUMASA, who got Terry for the ridiculously low price of 250 million pesetas, which was partly paid with credit RUMASA received from the Banco Condal – which it owned.

Soon, however, RUMASA itself collapsed, its component companies being taken over by the Spanish Government, who having gone through the books with a fine-tooth comb, sold the companies off.  In 1985 Terry was bought by Harveys of Bristol, part of Allied Lyons, who agreed to look after the stud.  Allied then took over Domecq in 1994 forming Allied Domecq, which was bought by Pernod Ricard in 2005 and subsequently dismembered. Terry was sold to Beam Global, a subsidiary of Fortune Brands.

Terry is now a small brand as far as Sherry is concerned, marketing only a Fino, Amontillado, Oloroso and PX, albeit of good quality, and it looks, unfortunately, as if Beam, a major player in the spirits world is not really interested in Sherry. What most of the acquisitors wanted from Terry was the brandy, Centenario, a big seller in its famous bottle with a yellow net round it. They also make a Brandy 1900 and a Brandy Primero.