The next morning it was off to Williams & Humbert, on the edge of town but somehow near the centre as well. This is the biggest bodega in Europe, though you would never guess that from the front. It is a modern, even boring, industrial looking concrete complex from the outside, yet enormous on the inside, seemingly going off in all directions. Constructed in 1974, it is much cleverer than it looks from the outside, being a series of umbrella-shaped concrete castings which link together at the top. (see photo below) 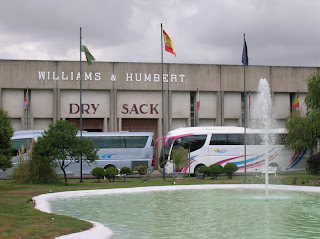 It was built for Rumasa who wanted one vast complex in which to house the various soleras for the different bodegas they had taken over. One still remains, the excellent Don Zoilo (see Tastings). There is space for a museum of tools and instruments, a huge tasting area, room for horse shows, large private gatherings and flamenco. Here is housed the famous collection of Anadas going back to 1920, a vintage car, and a large shop - not to mention huge aisles of Sherry. 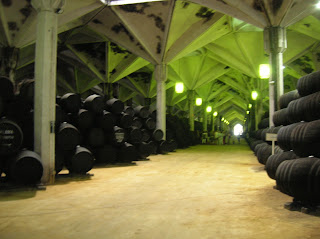 The bodega welcomes busloads of tourists, and was full of them, so there was nobody serious to talk with, but I managed to wander around unnoticed, taste a couple of wines and take in the amazing atmosphere.

Then it was off to Sanlucar to visit Barbadillo. It is a short drive on a beautiful day and I managed to park very near to the bodegas! They have a very interesting Museo de la Manzanilla upstairs above the formal entrance, which has many old vineyard and bodega implements, short videos, collections of old labels and bottles, and is well worth a visit. Back downstairs I met the technical director, Juan Guerrero Ferrer along with some of his staff and over a few glasses of the excellent Manzanilla Solear we discussed - at some length - Sherry and what is going on. 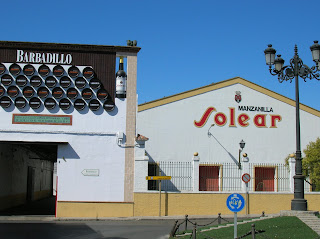 Most unusually for the Sherry area - indeed almost uniquely - Barbadillo is producing an excellent Sparkling wine, which they were first to produce. "Beta" is a traditional method sparkling wine made in the Sherry area from Palomino and Chardonnay grapes, and is probably the first sparkling wine produced in Andalucia, of which they are rightly proud. Then we discussed their wonderful, seasonally released Manzanilla en Rama. (The Autumn 2012 has just been released). It is a cracking wine, concentrated Manzanilla yet subtle and so fragrant and zesty. The very essence of Manzanilla. And it is only a part of their very fine range of Sherries.

Rosario, second from left in the picture above, featured in a recent Spanish television film about Sherry in general and Manzanilla in particular, which I happened to see a few days later. Felicidades, Rosario! What a delightful bunch of people - no wonder their wines are so good!

After a lovely day in Sanlucar, it was off back to Jerez for dinner and a glass of Sherry. Next day I was off to Malaga for a pre-opening visit to the latest bar-restaurant, Los Patios de Beatas. It is huge and beautifully set up in an old building right in the old city centre off the Calle Granada, and has tasting rooms, extensive bar, restaurant and entertainment areas for Jazz, Flamenco etc. The kitchens are state of the art, and the wine list is probably the best I have ever seen - it is immense!! Next time you are in Malaga, you have to go. This in itself is a very good reason to go! It is a difficult place to photograph, but the photo below should give you an idea of at least part of it.