Appearance
Quite deep amber fading through yellow to green tinged rim, some age apparently, legs.
Nose
Fragrant amontillado, quite nutty, a curious interplay between that implicit sweetness of amontillado and real sweetness harmonised in the wine over decades, beautifully aged - fresh with minimal oxidative or woody notes, a certain tang with slightest traces of dried apricot, vanilla and raisin, complex, lovely.
Palate
Medium sweet - if not sweeter -  but the sweetness is balanced by that tanginess and traces of tannin from the wood. It could do with less sweetness but it was made when this style was more the norm. Nonetheless, the flavour is not masked, and is that of genuine amontillado, with the characteristic toasted nuts flavour and terrific length.
Comments
W & H are famous for their excellent sweeter wines, usually made by solera ageing the blend. Many "Medium" Sherries are horrid pre-bottling blends made to a price. This is not. All that went into this blend was quality wine. And time. The blend was introduced by Carl Williams, second generation of the family, in early 1900. It comes from a solera of only 27 butts which has a bit of a story. In the days when the bodega was still family owned, it was decided to de-list the brand, but the then capataz, Manuel Offerrall, liked the wine so much that rather than dispose of it he had it hidden in among the Canasta soleras. His deception was only discovered 25 years later when the new owners, Rumasa, moved all the soleras to the new bodega. Francisco Salas Lopez, the "nose" of the bodega sniffed out these special butts which were obviously exceptional and not connected with Canasta, and informed the new capataz, Jose Luis Moreno Garcia. They figured out what had happened and a new brand was born. The wine is not sold as a VORS, but probably could be. It is certainly expensive enough! More than many VORS in fact, but it is lovely. And it is nice to see a more traditional label. 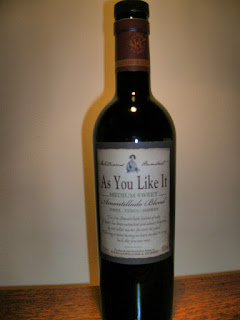 Price
£ 23.99 (per half bottle) from Waitrose, also available from the Wine Society.

Email ThisBlogThis!Share to TwitterShare to FacebookShare to Pinterest
Labels: As You Like It Amontillado, Paula's Sherry Blog, Sherry, Williams Humbert