Juan López Campos established himself as an almacenista in Jerez in 1819. For more than half a century he grew very successful, due in a large part to the quality of his vineyards in the best pagos which he cared for assiduously. The bodegas were in the Calle Ávila and Calle San Francisco de Paula, the latter of which may be the bodega which is now the fine restaurant La Carboná.

In 1868 Vicente's successors, Vicente, Antonio and Juan López de Meneses joined with their cousin Antonio López de Meneses, Duque de Banos, who had established his own bodega in the Muro de la Merced, close to a park and the urban railway line. 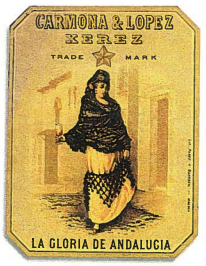 In 1878 the firm decided to venture into the export markets with wines like: Jerez Doble Pálido, Pálido, Oro Oscuro, Oro, Oloroso, Pasto, Amontillado, Flor Fina, Pedro Ximénez and Tintilla de Rota. Before long they had earned a reputation for quality in America and Europe. They had a couple of brands specifically for Britain: Lunch Sherry, and Prince of Wales’ Feathers, while they sold a range of Soleras Finas in Spain. For a while they were suppliers to the Spanish royal household.

The firm also launched a brandy “Cognac Fine Champagne” distilled from Jerez mostos in magnificent pot stills and its label carried the trade mark star which adorned all their labels. They also produced Quina, good vinegar and olive oil.

In the Bordeaux Exhibition of 1896 they won a diploma of honour, and won many other awards at other wine competitions. In 1909 the firm appeared as Carmona y López Sucesores at a different address: Calle Muro, and in 1911 the trading name changed again to A López de Meneses at the same address, but it seems they also had bodegas in Calles Colon, San Francisco de Paula, Lanuza, Arguelles, Circo, Ceniza, Horno and Huerto del Carmen. Between 1916 and 1932 the firm appears in Calle Cruz del Canto and later, Juan L López de Meneses appears in 1945 in Calle Zaragoza, where it remained until it closed down in 1954.