Ageing in Jerez: The Solera System

Up till now, the wine-making process has been pretty similar to that of other wines, except for the fortification, but now comes the process which makes Sherry the wine it is: ageing in Solera. There are a few wines which are not aged in Solera - the Anadas or Vintage Sherries - which age "statically" in the same butt till ready, but these are pretty rare, and very expensive. The key to Sherry is "dynamic ageing", where the wine flows from butt to butt. The word "Solera"  comes from the fact that the butts containing the oldest, finished wine are at floor ("suelo") level.

After wine is drawn from the solera for blending and/or bottling, more wine is needed in the system to replace it and refresh what remains, so butts from the Sobretablas or the Anadas are used to supply it. These are young wines, perhaps 6 - 8 months old, which have been classified so they go to the correct solera. The Solera System is almost unique to Sherry, and while it is complex, it produces an incredibly consistent wine. Each style of wine has its own solera, so there are many, and each one is worth a fortune. There are even one or two which date from the XVII century! As the wine is constantly moving through the system, however, very little remains of the ancient wine except the character it imparted to the Solera. Some brands of Sherry include the date of the Solera's foundation, (eg Gonzalez Byass Solera 1847) but this should not be mistaken for a vintage date. Only bottles labelled "Anada" will have a vintage date. Sherry only has an average age, which can be amazingly old, easily between 60 and 100 years! 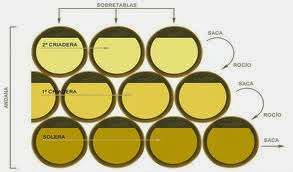 Above is a schematic Solera system. "Saca" is the withdrawal of wine, "Rocio" is topping up the butt. The process is known as "running the scales". As you can see in the diagram, the finished wine is withdrawn (never more than a third of the butt, in order to retain the style of the wine) and topped-up from the first Criadera, which is itself topped-up from the second Criadera etcetera. Each Solera system consists of a Solera, the bottom row of butts, and a widely varying number of Criaderas depending on the type of wine. An old Jerez Oloroso, for example might have three Criaderas, while a Manzanilla Solera in Sanlucar might have up to twenty-five. This constant Saca and Rocio means the older wine is constantly refreshed with younger wine, while giving to the younger wine its character and complexity. Before topping up each butt, the wines from the previous criadera will be blended together, ensuring greater consistency.

There are two distinct types of Sherry: wines aged "biologically" under a layer of Flor yeast (the Finos and Manzanillas), and wines aged "oxidatively" without that layer of Flor (Olorosos). There are of course some wines which are aged in both ways (Amontillados and Palos Cortados). The Flor provides a barrier to air coming into contact with the surface of the wine, keeping it pale in colour and fresh, and imparts to it complex, bitter flavours and aromas such as dried flowers, camomile, dough, bitter almond, olive brine etc. Wines without Flor are exposed to the air and oxidise gently, which creates deeper, mahogany colours, and a nuttier, fuller, oxidised character. The butts normally have a capacity of 600 litres, but are only filled to 500 litres (or 36 arrobas, a local measure) to allow headspace for either Flor or air to work its magic. Much to the Scotch Whisky Industry's despair, the butts are never replaced - they may be repaired, but never replaced, so some are very old indeed, and with good reason. 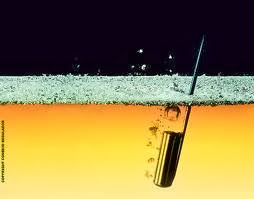 Especially with the Finos and Manzanillas - the Flor wines, replacing or renewing butts would adversely affect the wine. Sherry is not like fine Claret, for example, aged in new barrels every year to add complexity of flavour. The Flor yeast is constantly renewing itself, and requires the special conditions found in old butts: humidity, stable temperatures, and an alcohol level of not more than about 15.5% vol. Bodegas are often sprayed with water to conserve coolness and humidity and thus protect the Flor. As the Flor renews itself, dead yeast cells sink to the bottom of the butt, and over time, a thick layer of these cells builds up. They decompose in a process called "autolysis", which adds even more complex flavours to the wine - savoury, toasty, even slightly cheesy. Naturally, the butts need to be cleaned out occasionally, but great care is exercised to minimise any disturbance to the Flor. The longer the wine is in contact with these lees, the more complex its character, so Finos and Manzanillas sold at average three years old (the minimum age) have very little of it, but older wines, say average five years up to ten or more have much, much more. Manzanilla Pasada for example, and also wines bottled "en rama" - with minimal filtration.

Flor consists of a few varieties of naturally occurring saccharomyces (sugar-eating) yeasts. They settle on the new wine and feed on the various nutrients it provides such as glycerol ( a substance created during ferm- entation which gives a rounder implied - but not real - sweet feel to the wine), acetic acid (any vinegary traces), dissolved oxygen, alcohol itself. In turn it creates acetaldehydes, which give Finos and Manzanillas much of their flavour, and gives off some carbon dioxide. The lack of glycerol in these wines gives them that super-dry feel, and they don't have much of the "legs" or "tears" which run down the glass.

As wines age in the Solera system, the alcoholic strength rises slightly and gradually, because of transpiration of water from the wine. Losses in liquid volume are between 3-4% per annum. The Flor wines are most affected because this inexorable rise in strength will slowly kill off the Flor, allowing oxidation and the wine's gradual transformation to Amontillado. If a Fino or Manzanilla loses its flor for some reason, it will be fortified to 17 or 18% and become an Oloroso. Running the scales regularly is therefore vital, as the younger wine is of a slightly lower strength, and the act of moving the wine provides fresher yeast and some oxygen to nourish the Flor. The scales should be run regularly for another reason. The wine is constantly ageing, and to leave too big a gap between sacas would create an age difference between the last one and the latest one. So if you do your saca every six months, for example, you will always have to do it every six months to keep the wine consistent.

Once the wine has completed its journey through the solera system, it is ready for bottling as a straight Fino or Oloroso for example, or ready for blending. While some brands are aged in solera as a blend from the start, most are blended after the solera. A Cream Sherry is usually a blend of Oloroso with Pedro Ximenez, wines from at least two soleras. Bristol Cream is a more complex blend, though not necessarily better, which includes Amontillado. The more commercial cheaper supermarket wines are blended down to a price the supermarket wants to pay, and consist of various wines of varying quality. Beware the "Amontillados" which contain little if any real Amontillado. In this context, "Amontillado" is a medium wine, where in fact it is a dry wine of good quality. Pale Cream is a blend of Finos and rectified concentrated must (grape juice boiled down to lose much of its water content, but keep its pale colour.

The future of Sherry depends in part on the removal from the market of the cheap blends which people associate with vicars or grandmothers (though they still form a fairly large proportion of many bodegas' business - if not very profitable) and the resurgence of the natural styles of Sherry.