Last night Gonzalez Byass hosted the annual charity dinner for the Reyes Magos (the three Kings or Magi) at their bodega Los Apostoles. Each year three people are chosen to dress up as the three Kings, Melchor Gaspar and Baltasar, and distribute sweets to children in the streets on the night of the 5th January. All those attending the dinner who had previously done their royal duty received a gift from the Reyes Magos Association, as well as advice from past masters.


The High Court has annulled another fine imposed on Jerez by the Spanish equivalent of the Office of Fair Trading. This one was for 22,000 euros and was imposed on COAG, an agricultural organisation, for allegedly fixing grape prices with bodegas. Luckily the Court seems to have a better understanding of how the wine trade works.

Journalist Javier Benitez has written a book about Sherry for children, published by Peripecias Libros and approved by the Consejo Regulador. The protagonist is a mouse called Balti who, along with another, English, mouse called Monti, discovers how things work in a bodega. The book is illustrated by fellow Jerezano Jose Juan Romero, and is sold under the title "Balti: Aventura en la Bodega. It will hopefully prove useful to Jerezano children who have little understanding of their heritage.


Gonzalez Byass Cuatro Palmas has received 97 points from Robert Parker, and has been rated among the best wines tasted by the organisation in 2013. Parker recently appointed a new man to cover Spanish wine, Luis Gutierrez, who pointed out the quality of the other wines in the Palmas range, awarding 90 to the Una Palma, 91 for the Dos Palmas and 95 for Tres Palmas. It makes a pleasant change to have a Spaniard tasting the Spanish wines, someone who has a better understanding and capacity for criticism than his predecessor. 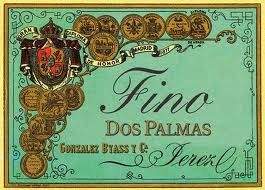