"You can smell that lovely aroma from the street!"

The I “Gymcata Denominacion de Origen Jerez” has been a great success. The 13 teams of contestants had to pass tests such as blind tastings and differentiating different types of vinegar, going round tabancos and bodegas.

A member of one team, the “Turismologos”, a UCA student, said that she had begun to get to know Jerez itself, rather than just the route from the station to college. “It is really interesting”. 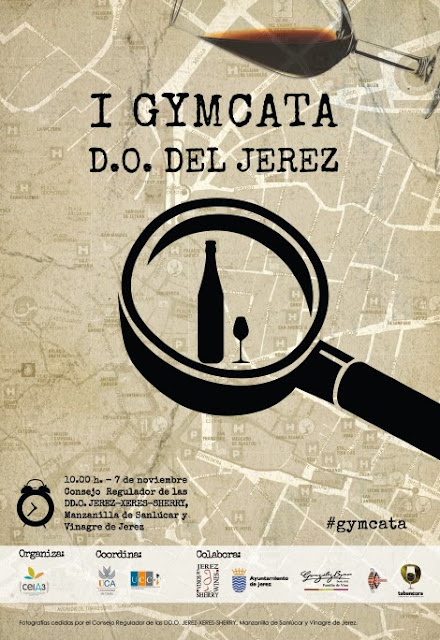 The event, organised by the University of Cadiz (UCA) and the Campus of Agro-alimentary Excellence, and supported by the City Council, The Consejo Regulador, Tabancora (the Tabanco association) and the Association of Oenologists of Andalucia, was timed to coincide with the V European Day of Wine Tourism. Another student, of oenology, said it was great fun. They had visited Gonzalez Byass and the tabanco El Pasaje. “The professors have been encouraging us, and “we’ve arrived in a very good place”.

In El Pasaje they had a really sweet test. Manuel Sanchez, one of those in charge of the test, and who is finishing his doctoral thesis on research into making sweets from Sherry, brought various samples of truffles to see if the contestants could tell which type of Sherry they had been made with.

Another team, “Los Viñeros”, were the winners after they completed all the tests in the least time. The team’s spokesperson pointed out that the event is the perfect way to promote not only Sherry itself, but to get the locals to realise what a treasure of a wine they have. Speaking from the door of the tabanco Las Banderillas, Domi Guillen also said that people would get to know better the tabancos of Jerez, which are delightful. “My test was to differentiate between Palo Cortado, Oloroso, Amontillado and Fino”.

Most of the teams were students, mostly Spanish, but from as far afield as Colombia and Portugal, and they were all delighted to discover how good Sherry and other local products are, not to mention the place and its history.

Tomorrow is also full of activities. Many bodegas have doors open days, some with violin concerts or equestrian shows, visits to vineyards, art exhibitions. There will also take place the first of the “Sherry Cooking Classes”, while the Consejo is organising a tasting for the visually impaired in collaboration with the City council and the ONCE (the Spanish National Organisation for the Blind). There will also be a tutored Sherry and food marriage tasting with a reading of poetry. Then there will be a timed rally starting in the Plaza Arenal.