World Sherry Day, which began last May and saw people getting together with Sherry and food around the world, has been transformed for 2014 into International Sherry Week.  A new website is being created (www.isherryweek.com) and new dates have been arranged. The 2014 edition will take place between the 2nd and the 8th of June.

According to Chelsea Anthon of International Sherry Week, last year’s one day affair was simply not long enough, and a week is a more suitable period for all the worldwide events. They might, however change the word “international” for “world”. It is all still on the drawing board, but Jerez council has been busy.

A whole series of events will be taking place next year in Jerez, European City of Wine 2014, most notably Vinoble, from the 25th till the 27th May. Events of all kinds are being arranged to take advantage of the city’s new status. Wine is, obviously the protagonist, but there will be many horse and flamenco events, and motor racing. 2014 is definitely a year to visit Jerez. 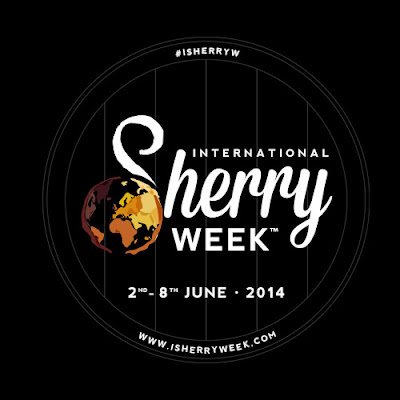 Fifty members of the Andalusian Academy of Gastronomy and Tourism paid a visit to the Gonzalez Byass vineyard of la Canariera yesterday to celebrate the end of the fermentations. Saint Andrew’s Day (actually the 30th) is an important day in the viticultural world, when the fermentation ends, and the musts become wine. As the popular saying  in Spain goes:  “Por San Andres, el mosto vino es”. (The must becomes wine on St. Andrew’s Day.) This was the first such celebration in the province, and there were various well-known chefs as well as the GB directors, led by Pedro Rebuelta who enjoyed some good food with GB wines.
Posted by Paula MacLean at 12:56