William Garvey Power was an Irish aristocrat born in 1756 at New Ross, County Waterford to Patrick Garvey Shortall and Mary Power. He came to Cadiz in 1776 in search of merino rams to mate with his father’s ewes. According to legend, his ship was wrecked in a dreadful storm in the bay of Cadiz, but he was rescued by a Spanish naval captain, Rafael Gomez, whose daughter nursed him back to health at their home in Puerto Real. Garvey fell for Sebastiana Gomez Jimenez and later married her in 1794. They had two children, Patrick (1796-1872) and Maria Antonia. 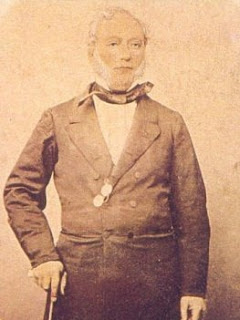 It seems that he never went back to Ireland - although apparently he did send the sheep -  moving soon to Sanlucar as a general merchant, but his real interest was wine.  Dated 1780, the oldest document in the well-stocked Garvey Archive is a receipt for wine purchased from one Juan O’Connery. The earliest accounts book, dating from 1798, shows that he bought most of his wine from Gordon & Co, but also from fellow Irishman, Richard Shiel who worked in Spain for Devereux Shiel & Co of London. Garvey began by shipping small quantities to England and Ireland.

In 1793 Garvey moved to Jerez; at the age of 38 he was already quite wealthy, and decided to build a huge bodega next door to his house. He was considering the marketing of Fino, and was probably the first in Jerez to do so. The bodega was built in the Calle Divina Pastora and was the largest in all Jerez, 170 metres by 38 metres. It was christened Bodega San Patricio, after Patrick, Patron Saint of Ireland, and later its Fino and indeed William’s son were also given that name. The bodega was full of wine – 8,000 butts of it. A thousand butts of Amontillado alone were kept ready for almost immediate shipment.

Outside, under the colonnades of the bodega, was stored a huge number of butts of more common wine (rayas, most likely) which would be used in blending. The Price of Wales (later Edward VII) once visited Garvey, and was impressed particularly with an old brown Sherry, the solera of which had been laid down by William Garvey. According to Vizetelly, the bodega also held stocks of Montilla wine, and even had an establishment there (at Lucena) where 1,500 butts were produced annually from bought-in grapes. This was not uncommon in those days. Then there was the stud - like so many in the Sherry business, horses were hugely important to the Garveys.


The bodega San Patricio remained the largest of all until the 1970’s when Rumasa built Bodegas Internacionales, now Williams & Humbert. The lovely old Garvey bodega was demolished in 1997, and replaced by a supermarket. Sic transit Gloria.

William and Patrick Garvey believed in Fino and, of course its descendant, Amontillado, and were among the earliest and most successful in shipping these styles from Jerez. Up till then, it was mostly Oloroso, usually blended with PX. What we now know and love as Fino was regarded then as a “sick” or “straw” (pajizo) wine, covered in yeasty scum, and was used for vinegar production. Garvey had other ideas as to its quality, possibly influenced by his stay in Sanlucar and his experience of Manzanilla, but he died before he could do a great deal with it, leaving its development to Patrick.

For a short while in the early XIX century William Garvey was a member of a partnership with Juan Carlos Haurie, his nephew Juan Haurie and James Wilson. This was organised by JC Haurie who was an unscrupulous operator and claimed to be the biggest shipper in Jerez, but in fact most of the wine had been shipped by Garvey and Wilson. On William Garvey’s death in 1824 this partnership was soon terminated by his son and heir Patrick Garvey Gomez.


Patrick senior ran the business extremely ably, making it the biggest shipper in Jerez in the 1840’s and 50’s. In 1850 the Palacio Garvey was built for the Garvey family in the Plaza Rafael Rivero in the historic centre of Jerez and was highly luxurious. It is now a 16 room boutique hotel. In 1853 Garvey exported over 3,000 butts, more than any other shipper. By now Patrick had the resources to pursue his and his father’s dream: the Fino. He bought stocks of Fino and these were delivered when it was dark to avoid the disdain of neighbouring bodegueros. Fino San Patricio was launched in the 1850’s in Ireland with immediate success through the Dublin agent James McCullach.

The three sons, but mainly Guillermo and Jose, continued with the business after the death of their father in 1872, but after Jose’s death, the firm was divided up to family members and became a limited company, though remaining in family hands. In 1923 Patrick Garvey y Gonzalez de la Mota Capdepon y Velazquez, great grandson of the founder was awarded the hereditary title Conde de Garvey by King Alfonso XIII. 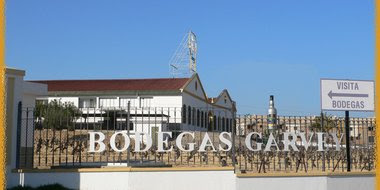 After the Civil War, the firm invested in more vineyards and in 1970 the new Bellavista bodega complex was completed by architect Miguel Fisac. This was another giant bodega, and the idea was to have all aspects of production in one place. Here, vinification, stabilisation, ageing and bottling (38,000 bottles could be filled every hour) all took place, and here too were the offices. Provision had been made for future storage capacity of 25,000 butts. At the bodega there is a fascinating museum of 15,000 old Sherry labels from 1854 to 1954 collected by Jose Saldaña Trigo, who bequeathed it to the bodega. There is also a collection of old XIX century hand-painted bottles.

In 1978 Garvey was taken over by Rumasa, who continued with the modernisation programme and ramped up sales at home and abroad in this, one of the last of the boom years. They also restored the old Palacio Garvey. By now Garvey owned 600 hectares of vineyard including the Cerro Viejo, Hacienda San Patricio and Myriam de Montegil, all in Jerez Superior albariza.

Rumasa was expropriated in 1983 by the Spanish Government, and all its component companies sold off. Garvey was sold to a German cooperative, but in 1997 it was bought by Nueva Rumasa, and was merged with another of Nueva Rumasa’s acquisitions, Vinicola Soto in 1998, becoming Grupo Garvey in 2000, along with Bodegas Valdivia and Zoilo Ruiz Mateos.


For a while things looked good, with a revamp of the range in new, dumpier bottles, and the addition of Soto’s Manzanilla Juncal to the Garvey range (for some reason). But Sherry sales were steadily falling, and Garvey was not immune, particularly with their large stocks. They have been plugging away, however, and even participated in the first World Sherry Day.

When Nueva Rumasa imploded, many of its companies were sold to Angel de Cabo, who ran a firm called Back in Business which (theoretically) got firms back on their feet, but he is now in jail, and the whole situation was a disaster. Work at the bodega had all but ground to a halt, and huge quantities of wine were sold off to pay for the receivers and the remaining workforce, which had already been dramatically reduced. Things had looked bleak to say the least for five years until Andrew Tan, the Phillipino brandy magnate who had already bought what remained of the old Domecq business, bought Garvey and Zoilo Ruiz Mateos along with brands and stocks and the supply contract for Sandeman in 2017 for 35 million euros. This includes the liqueurs Calisay and Ponche Soto. Hopefully he will be able to reverse the fortunes of this once great firm.

Brandy: Esplendido; Renacimiento; Solera Reserva; Sacristia and:
Conde de Garvey : 200 years old solera of just 5 butts, 100% holandas distilled in the bodega in an old Cognac pot still bought in France. This was the Garvey private brandy till Ruiz Mateos discovered it and decided to release it under Conde de Garvey brand. The first filling of only 3,000 bottles was drawn on Saint Patrick’s Day, and Lourdes Davila Ybarra, the current Condesa de Garvey presided over the occasion. The brandy retails for around 750 euros per bottle. 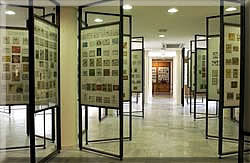