Starting yesterday, Osborne has opened the doors of one of its most interesting bodegas, La Mora in the Calle Moros, Puerto de Santa Maria, to the public. The bodega has been converted into a sacristy containing some 635 butts of very old and historic wine of all types, some dating from well over 200 years ago. This is a veritable enological museum containing the biggest collection of historic wines in the Sherry zone. There are 26 soleras, all real jewels which make up the original range of old Osborne wines and also those which were bought, such as Domecq, Duff Gordon, Blazquez and Bobadilla. It has taken a year to assemble all these wines, which were previously in their original bodegas or at various Osborne bodegas in El Puerto, into one single bodega.


The opening of this exhibition took place last night with a reception for local politicians, tour operators, travel agents and members of the Consejo Regulador, along with directors of Osborne. A piano recital was held, followed by a visit, the same visit which locals and tourists can now make. The exhibition is more than just barrels of Sherry, however. There is also an exhibition of old labels and one of old bottles, signed by the more – or less – famous personalities of the last two centuries or more, and some sculptures of well-known locals. 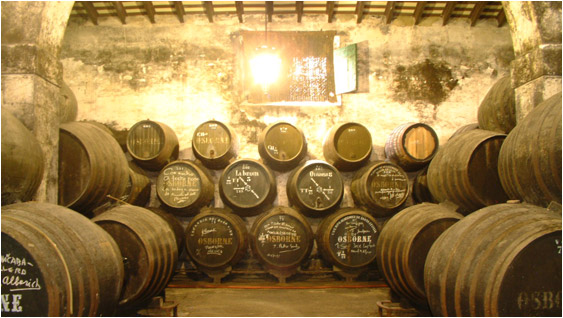 The visit starts at the beginning with two giant butts of 2,300 litres capacity, the founding butts, which preside over it all. From here the genealogical tree grows outward: Duff Gordon 1768, Osborne 1772, then the Washington Irving and Zar de Rusia soleras and many more.

Osborne, which is now run by the sixth generation of the family, has other such projects in the pipeline. They are planning a bullfighting museum, a museum of tools, and one of brandy. The company currently produces 2.5 million litres of Sherry, of which 70% goes for export, and they are the leading producers of brandy. A lot has been achieved in the last 250 years, all recorded in the sediments of these historic wines.


Tickets for the visit cost 8 euros, and tours by an expert guide are in Spanish, English and German. A tasting will follow of four Sherries and a solera reserva Brandy with nibbles.
Posted by Paula MacLean at 23:26