Peter Sisseck is a Dane who has lived and worked in Spain for 30 years and has been famous for the almost legendary and very expensive (usually over 1,000 euros) Ribera del Duero red “Pingus” since 1995 and more recently the second wine “Flor de Pingus” and another fine red called “PSI”. He is also the oenologist and partner with Carlos del Rio González-Gordon, of the González Byass family,  in another Ribera del Duero bodega: Hacienda Monasterio and works in Bordeaux as well. For years the two men have been thinking about producing a white wine of a similar quality to Pingus and decided on Fino Sherry. So in 2017 Peter and Carlos bought a mid XIX century bodega in Calle Francisco Javier from Juan Piñero. It contains 444 butts of fine quality Fino.

Juan Piñero had bought the bodega in 2006 from the almacenista Ángel Zamorano - who had run it for 33 years having started from scratch in 1974 - and installed the Fino Camborio solera (originally Terry) which he now owned. His oenologist Ramiro Ibáñez separated out 65 butts which were removed to the Piñero bodega in Sanlúcar, where he retained and continues to use the brand name. The rest of the Camborio solera had been refreshed using mostos from the pagos Macharnudo and Añina produced by Viña Callejuela. 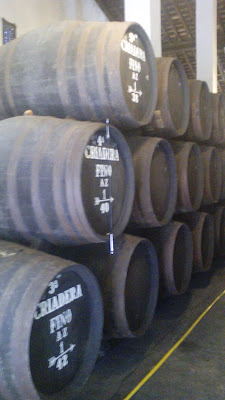 At about the same time as they bought the bodega, Peter Sisseck and Carlos del Rio bought 2 hectares in the pago Macharnudo Alto and the 8 hectare Viña Los Corrales in the highest part of the pago Balbaina (at 92 metres) which are 35 to 40 years old and now being cultivated organically and as soon as practical biodynamically. The solera system was divided into two - one Macharnudo Solera and one Balbaina solera, and they are now refreshed with mosto from their own vineyards, but it will take a while for the effect of the change to become apparent in the finished wine. As things stand, the two soleras in the bodega total 444 butts, both arranged as five criaderas plus solera: Solera AZ (Ángel Zamorano) from Macharnudo and Solera PS (Peter Sisseck) from  Balbaina.

Sherry is very different to Ribera del Duero or Bordeaux and Peter Sisseck admits he has a lot to learn about it so he is in no hurry to release the wine. So far neither the exact specifications for the wines nor brand names have been decided, nor even has a name been decided for the bodega itself, let alone a price for the wine, but the plan is for vino de pago, probably two, and they will be sold en rama. The possibility of unifying or making a blend from the two soleras has not been ruled out though quality will naturally be paramount. A small saca from selected butts may appear fairly soon. Many repairs to the bodega have been carried out in the meantime and it is very ably run by the capataz, Miguel Calvo Gil, ex Valdespino, and his assistant José Luis Blandino, grandson of Pepe Blandino, capataz at Tradición CZ.