The independent growers´ association, Asevi-Asaja has begun collating information about vines suffering from the Cylindrocarpon fungus which was identified last year. It affects the wood of young vines in their second or third year leading to their death, and there is no treatment yet available against its spread. Currently the growers are aware of five or six outbreaks in the Sherry vineyards, some of which are affected up to 40%, and which are manifested by the loss of vigour in the vine and necrotic stains in the wood which starts to dry out and the vine withers and dies.

Asevi has emitted a circular providing and seeking useful information which can be forwarded to the authorities to help with preventive measures. One grower in the pago Balbaina noticed a slight problema last year but this year it has grown to some 11% of his vineyard. According to him, while the fungus is mainly confined to 2nd or 3rd year vines, it is spreading to older ones as well possibly on pruning shears. He is also convinced that the fungus comes from the nurseries which supply rootstocks and which, while the are legally obliged to supply them free of viruses, there is no such obligation for funguses. Asevi is also thinking along these lines, and once they have sufficient proof they will persuede the Junta to take action at source. 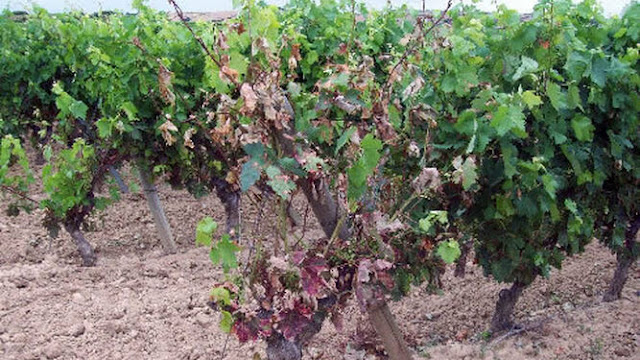 The association has expressed to the authorities the need to negotiate exemptions for affected growers from the requirement to repay grants for replanting under the vineyard restructuring scheme for the los of vines before the scheme reaches its conclusión. The first outbreaks of the fungus were detected in Sanlúcar in the pagos Miraflores and Carrascal three or four years ago. After observing the development of the disease in the affected parcels, Vara y Pulgar, a company specialising in vineyards, produced a report last August which noted the presence of the fungus in recently planted vinerards and and that it could have come from nurseries. According to their study, the problem centres round the rootstock 164-49 Coudert, the most widely used one for Palomono in the area.

Last August, after worries about another vine disease caused by Xylella Fastidiosa which was making an unwanted appearance in olive trees, it was found that the problema in Jerez was in fact Cylindrocarpon. A year later the problem is not only still here but it is growing, and without an effective cure. Asevi members have conducted experiments using the disinfectatnt effects of ozone sprayed in water which is having some effect in reducing the propagation of the fungus, but not in eliminating it. Worse still, the fungus seems to be spreading to other rootstocks, and again it seems to have come from young vines coming from nureries. Such wood fungi are not exclusive to Jerez. 27 different ones have been identified round the world, and in Spain Cylindrocarpon has also been detected in the extensive vineyards of La Mancha and also closer to home in Montilla-Moriles.
Posted by Paula MacLean at 13:51