The two half butts of XC Palo Cortado Añada 1990 which González Byass sent on a six month sea journey on the Spanish Navy training ship the Juan Sebastián de Elcano” back in February have now been bottled and packaged and are ready for sale. Naturally this is a very limited edition and amounts to only 550 bottles. The gift pack contains a 75cl bottle of this great wine along with a 20cl bottle of the same wine before it went on its journey so you can see the difference which, according to the bodega is dramatic:

“We enter a world of aromas, of cedar, carob and nuts, a dream world where we don´t know if we are in the sacristía of a bodega or the premises of a perfumer. It envelops the palate, it is like velvet, indescribably harmonious, a Palo Cortado which has been able to soak up nuances and enrich itself at each stage of its journey to return to us as a treasure; topaz, amber resin, the sun of the Incas, clove, vanilla, the heavens set with stars, the southern cross, the foam of the waves, the power of the wind and the flavour of salt”. As the old saying goes: “Mareado, el buen vino de Jerez, si valía cinco, vale diez” (Seasick, the good wine of Jerez, if it was worth five, is now worth ten). So maybe it is worth the price per pack of 550€ - hopefully you have a wealthy benefactor. 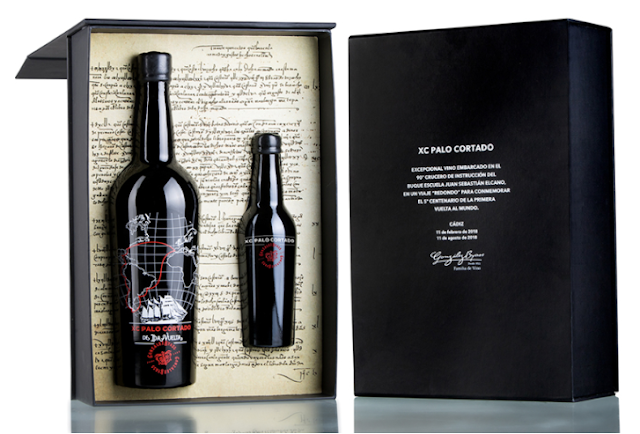 The ship set out from Cádiz and sailed all round South America returning six months later in August having covered 19,604 nautical miles through all sorts of weather conditions. The wine was sent on its voyage to celebrate the 500th anniversary of the first circumnavigation of the globe by Magellan. He was killed on the journey and only one of the five ships returned; the Nao Victoria, captained by Juan Sebastián de Elcano.
Posted by Paula MacLean at 12:58