Appearance
Deep walnut brown with bright ruby/copper highlights and a trace of green at the rim, legs.
Nose
Intense, even concentrated, with lots of wood and Oloroso, this smells old and serious. There are also notes of caramel, vanilla, brown sugar,  and traces of coffee and pasas.
Palate
Rich, generous and full bodied, this is a real after dinner brandy. For all the wood on the nose there is by no means excessive tannin and it is intensely flavoured, its generosity lingering for ages.
Comments
This must be one of the last bottles of the old design which has now been replaced by the Mérito 15 Solera Gran Reserva, which as far as I know is the same brandy. It is all a bit complicated as Diez Hermanos merged with Marqués del Mérito, then they were both taken over by Rumasa. They were then taken over by Marcos Eguizabal along with Zoilo Ruiz Mateos and thus used to make Gran Duque de Alba which went to Bodegas Internacionales which is now Williams & Humbert. The Espinosa family which now owns Diez Mérito have tried to simplify things and now offer a range of brandies which are all called Mérito, followed by their age and type. This solera was established in 1819 and the brandy is around 15 years old, distilled from both Palomino and Airén.
Price
25.00 euros, Licores Corredera 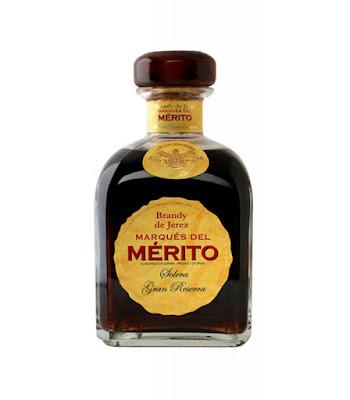