George William Suter Stevens was born in Malta in 1809. He went to Jerez in 1831 where he worked as a merchant specialising in Sherry, forming the firm of Cramp Suter & Co. in the early 1850s. Despite his initially unfavourable impressions of the town, he remained there for the rest of his life at Plaza del Mercado, 10 and was married to Candelaria Miramon Asencio. He was not only British Vice-Consul from 1869 till he died in 1887 but also Consul for the Ottoman Empire. His partner was Francis Cramp (1820-1875) who had been a partner in Port and Sherry shippers Offley Cramp & Forrester since 1846, and brother in law of Joseph James Forrester who made a famous map of the Douro. Cramp spent his time between Jerez, Oporto and London, while Suter ran the business in Jerez.

Suter bought wine, often from González Byass, for resale in Britain and Ireland, where he had various agents. He was more of a shipper and almacenista  but still produced various brands. Henry Vizetelly visited in 1876 and commented on the fine Fino soleras, kept in a very dark bodega and wine dating from 1812 along with some other very old wines which had been to Manilla and back, East India Sherry. The old wines were evidently highly aromatic but rather potent. Perhaps Suter’s main claim to fame was a map he drew of the Jerez viticultural districts, the first of its kind, with Miguel Palacios in 1857. It could be that he got the idea from JJ Forrester. 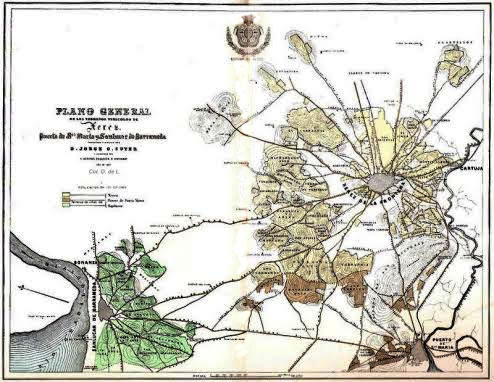 By 1877 Suter had bodegas at Calle Rincón de Malillo, 7 as well as two houses, one at number 4 of the same street and the aforementioned at Plaza del Mercado, 10, where he lived. The Cramp Suter Sherries must have been good as for a while Bodegas Cayetano del Pino sold them under licence. After Suter’s death the bodegas were bought by Bartolomé Benítez Lago, who sold them in 1931 to Fernando Carrasco Sagastizabal.