Sherry, wonderful though it is, is only one of many fortified wines, and in the heyday of this trade, many fortified wine producers or importers would seek to include other styles in their lists. Some were not above imitation, but many were genuinely involved in Sherry, Madeira and Port, as well as Malaga and occasionally Montilla. For some it was more of a dalliance, for others it was quite serious. Four white, the other red, they are in many ways complementary - and four of the greatest wines in the world. Most of these firms appear in separate posts concerning the Sherry. Below is a list of  those who are or were involved in both Sherry and Port, and you may be surprised how many there are:


FW Cosens (Da Silva & Cosens)
Frederick William Cosens was a long established Sherry shipper based in London, and from around 1848 also in Jerez, when in 1862 he went into partnership with london based John da Silva, a Port shipper established in 1798. The firm was joined by George Acheson Warre and later merged with Dow & Co. Andrew James Symington joined the firm in 1905, and his family took control in 1961. The Symington Group are now proprietors of Dow, Warre, Graham, Smith Woodhouse, Gould Campbell, Cockburn and Quinta do Vesuvio Ports. The Sherry side of the business had been on the slide since Cosens' death in 1889, as his sons lacked interest, and it was bought out by Ivison in the late 1920s.

Croft
Established in 1678, Croft was always a Port shipper, and only entered the world of Sherry in the 1970s, when International Distillers and Vintners (IDV) decided to use the old Gilbey soleras which had been maintained by Gonzalez Byass. A huge new bodega complex was built, known as Rancho Croft. They introduced a whole new style of Sherry: Croft Original Pale Cream, which was enormously successful. After various takeovers and sell-offs, Croft Sherry now belongs to Gonzalez Byass, while Croft Oporto was bought by Taylor Fladgate in 2001along with Delaforce. The port is currently on good form.

Diez Hermanos
Diez Hermanos were involved with Port from 1924, and slightly with Madeira. Pablo Diez went to Oporto in 1929 to run that side of the business until he died in 1966. The Port business was then sold to Offley. The only vintage Port they shipped to the UK was the 1975, presumably shipped by Offley. (see Bertola/ Kopke/Offley Forrester)

Duff Gordon
Duff Gordon were always more important in Sherry, but had some useful interests in Port. The firm was bought by Osborne (see below), who sold off all the Port side of things - except the brand name. From time to time, Osborne release Duff Gordon Port as a sous-marque, as well as their own brand. While they have lodges in Oporto, they own no vineyard, so grapes or wines are bought in. Osborne Port is of excellent quality, nonetheless. (See Osborne)

In the first guide to Jerez of 1882, Forrester and Co were present in the list of Sherry exporters. Their premises were in the Calle Cristal, 4, where they had a large and spacious bodega with excellent conditions for the crianza of wine. It was known as La Bodega de la Merced, doubtless because it was adjacent to the Convent of La Merced.
According to the guide, the entrance to the building was constructed in 1885, following through to an extensive patio with two rows of acacias which led to the offices. To the left was the bodega de extraccion, where the wines were prepared for their journey. Opposite the offices lay the sample room and various other rooms, and further on, the storage bodegas, a patio where barrels were cleaned, and a cooperage.
From the end of the XVIIIC, Forrester had premises in London and Oporto as well as Jerez. Towards 1887, they moved to the Calle Circo, 21 opposite the bull ring. There is no record of any activities in Jerez after about 1916.
This firm was related to Offley Forrester in Oporto. The original firm was Etty, Offley & Co. The Forrester family originated in Hull, England, and the first to Oporto was James Forrester in 1803, uncle of the famous Joseph James Forrester. The company owned the fine Quinta Boa Vista. In 1908 they faced difficulties and in the 1920s they were restructured. It could be this process which led them to abandon Jerez. Offley bought the Port interests of Diez Hermanos and were then bought by Sandeman, which now belongs to Ferreira.

Butler Nephew
John Nash, who had co-founded Burmester Nash & Co left the firm, and in 1789 started a new firm, taking James Butler into partnership. On Nash's death Butler took on his nephew John Tyndale as a partner, and later another nephew, Robert Butler. In 1845 Samuel Dixon joined the firm, which was later inherited by his three sons. The firm, small though it was, had a good reputation for quality. It was bought by Gonzalez Byass, and various vintages were shipped to the UK from the 1920's till the last one in 1975. Stephen Christie, who bought the GB Port interests, still sells Port under the Butler Nephew Label.

Gonzalez Byass arrived in Oporto in 1895 and bought wine from Hunt Roope until a disagreement led them to go it alone, and they opened up their own Port shipping business in 1896. They appointed Herbert Pheysey, son of the Army & Navy Stores wine buyer, to manage it. He was succeeded by his son Cecil, who retired in 1960. From 1901 till the mid 1930's, GB had an arrangement with the Van Zeller family to buy the entire production of their Quinta Roriz, marketing it under the Quinta name. They continued buying it till the early 1970's, while they also owned Quinta da Sabordela near Pinhao, and until 1958, the Quinta do Rei. After WW2 GB bought Butler Nephew. In 1979 GB Port (including Butler Nephew) was sold off  to Stephen Christie, and the stocks to Vasconselos, who were bought by Sandeman in 1989. The last GB Vintage was declared in 1975. Quinta de Roriz was sold to the Symington Group in 2009. Sabordela, which once supplied wines for Smith Woodhouse was sold, and was later acquired by Symington at the end of 2013, and now supplies wine for Smith Woodhouse again, it being part of the Symington Group.

Harveys
While Harveys have shipped and bottled Port in Bristol for a couple of centuries, their most serious involvement with it came when they bought Martinez Gassiot in 1961 and then Cockburn a few months later. On the Sherry side, Harveys had always shipped wine for blending and bottling in Bristol, and their presence in Jerez came as late as 1970, when they bought MacKenzie (see below). Harveys were in turn bought by Allied, which merged with Domecq, and Allied Domecq was bought by Pernod Ricard who sold Harveys to Beam, who are now owned by Suntory (and that is an abbreviated version!). Cockburn now belongs to the Symington Group.

Bertola/C N Kopke
Probably the oldest of the Port firms, Kopke was established in 1638. They decided to go into Sherry production in 1911 and set up a Spanish subsidiary, Kopke Bertola y Cia. Ltda. Later Bertola was bought by Diez Hermanos who were subsequently bought by Rumasa. After Rumasa's collapse Bertola was merged with the former Rumasa-owned Bodegas Internacionales by Marcos Eguizabal, an entrepreneur from the Rioja, and is now part of Diez-Merito, the Sherry division of his group. Kopke, was bought along with its Quinta de Sao Luiz, which it owned from 1922-66, by Barros in 1953.

MacKenzie
MacKenzie was established as a Sherry shipper in Jerez in the late 1850s. In 1870 Kenneth MacKenzie formed a pertnership with William Minchin Driscoll, formerly with Sandeman in Oporto, creating the firm of MacKenzie Driscoll. They had a good reputation till late 1940s when post war difficulties forced a sale to Ferreira.They rented Quinta de Napoles 1953-61 though rarely used the wine. The last MacKenzie Driscoll vintage Port shipped was the 1966. Their lodges at Vila Nova de Gaia now belong to JH Andresen. The business in Jerez was bought out by Harveys in 1970.

Cuvillo/Martinez Gassiot -  Founded 1790 by Sebastian Gonzalez Martinez, whose business was Port, Sherry and cigars in London. John Peter Gassiot joined in 1822, and in 1834 they bought a lodge in Vila Nova de Gaia (Oporto) which was run by a certain John Fleurriet Delaforce. Their Sherry was supplied by Cuvillo in Puerto de Santa Maria, who also supplied large amounts to Harveys, who used to bottle Port and Sherry themselves in Bristol. In 1961 Martinez Gassiot was bought by Harveys then next year absorbed into Cockburn, also bought by Harveys, who were themselves taken over by Allied in 1971. Harveys acquired their own vineyards and bodegas (mainly from MacKenzie) and Cuvillo, left with huge stocks, went bust in 1983. Martinez Gassiot is mainly BOB Port business now, and Cockburn belongs to the Symington Group.

Morgan Brothers
Established in 1715 in London, they shipped Quinta de la Rosa's wine along with Feuerheerd, but only established bodegas in Puerto de Santa Maria and lodges in Vila Nova de Gaia in the mid XIX century. Morgan was always a small house but with a good reputation, and ultimately its Port business was taken over by Croft 1952 and its Sherry interests by Osborne. Croft was sold by Diageo along with the Morgan Port business in 2001 to Taylor Fladgate, on condition that the name Morgan was not used, to avoid confusion with Captain Morgan Rum. 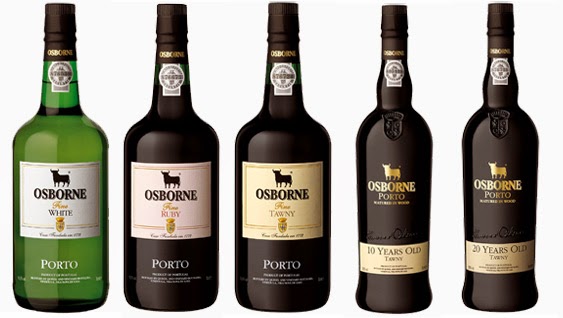 Osborne
Osborne already owned Duff Gordon (see above) when in 1967 they bought lodges from Quinta do Noval at Vila Nova de Gaia. They continue to produce Port of very respectable quality, having a winery in the Douro. In the past, they also shipped Madeira.

Sandeman
Of all the companies above, Sandeman were the most committed to both Port and Sherry. Founded by George Sandeman in 1790 in London,the firm had lodges in Oporto long before bodegas in Jerez, but these were acquired in 1879 with the bakruptcy of Pemartin. Sandeman has a long history as a family business, owning Offley, Robertson and Diez Hermanos (Port) until it was bought by Seagram in the 1980s. It is now owned by the Portuguese company Sogrape who also own Ferreira. 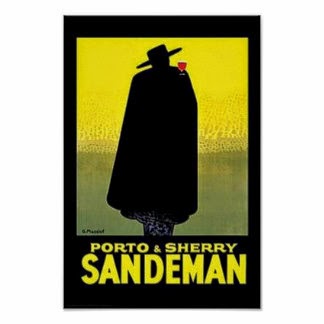 Williams & Humbert
For a while, W&H owned the Port firm Robertson Brothers, owners of Quinta Roncao and producers of vintage Port Rebello Valente. Robertsons was sold to Sandeman in 1953.

These are just the firms who took Port most seriously, but many other Jerez firms offered a Port, such as Garvey, Florido Hermanos, Manuel Gamboa Ramirez, Rafael O'Neale, Arturo D Williams, Valdespino, Conde de Morphy, Cayetano del Pino and Gutierrez Hermanos among many others.