This is a very interesting old bodega, still in family hands, and yet few seem to have heard of it. Doctor Faustino Gonzalez Aparicio, born in 1918 in Zamora where his family had vineyards, moved to Jerez in the 1940s and in 1947 married Carmen Garcia Mier y Zorrilla, daughter of a famous rancher who would later become the representative of Domecq in Mexico. They had 16 children and Don Faustino worked as head doctor for the Social Security. In the mid 1950s the family moved to a large house at Calle San Juan Grande, 7 which had once been owned by Felix Ruiz y Ruiz and one of the Domecqs.

Living in Jerez, he soon became attracted to the idea of owning his own bodega, and in 1970 he bought 220 butts including some small old soleras from Mercedes Aranda de Paul some over 100 years old and one dating from 1789 which had been stored in the Alcazar and moved them to the bodega  owned by his wife, Dna. Carmen Garcia Mier.

The bodega, which was once stables, is in one of the most interesting old parts of the city, the Cruz Vieja in the Barrio (neighbourhood) San Miguel. Here flamenco legends were born and wines were aged, there is real atmosphere, and it is in the heart of the city. It likes to call itself the smallest bodega in Jerez and contains some 300 butts. After the death of the founder the firm, which was operating as an almacenista, was inherited by his 12 heirs who, in 2014 decided to sell 40% of their wine on the open market under their brand name Cruz Vieja. 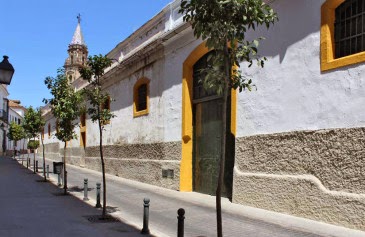 The family also own vineyard containing both Palomino and Pedro Ximenez vines, and make the wines which they age through their soleras. The 7 hectare vineyard at 70m above sea level is called Viña el Carmen and is the last one in the pago Montealegre and in a good part of Jerez Superior for Fino wines with lots of white albariza soil. It was replanted in 1972. The firm pays a consulting oenologist called Manuel Torres, who worked for 10 years at Sanchez Romate. His experience helps the smaller bodegas to manage new legistation from the Consejo which covers hygeine, traceability and numbering of butts.

The wines are unusual in that they are fermented in barrel; hardly anyone does that any more. The bodega is very traditional in how it makes the wines, but forward looking as well, bottling all the wines en rama. They also have a very good wine (well, Sherry) shop called La Casa del Jerez in C/Divina Pastora, very close to the Sandeman bodegas and the Real Escuela del Arte Ecuestre (Spanish Riding School). Here they have wines you can taste straight from the barrel, as well as a good range of bottled wines from other bodegas as well as their own. 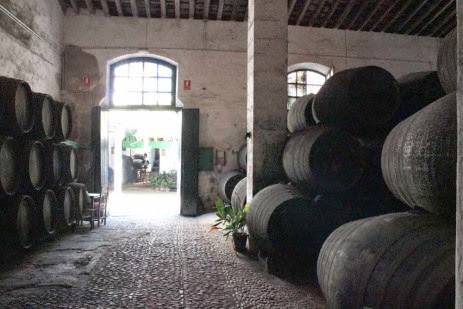 The range on offer is called Cruz Vieja, named after the square near the bodega, and also the name of one of the old soleras. There is a full range of Fino Cruz Vieja (62 butt solera from 1900 with 4 criaderas and solera, 2 annual sacas), Amontillado Cruz Vieja (Solera 1925, approx 6 years under flor and a further 6 oxidative), Oloroso Cruz Vieja, about 20 years old,  Palo Cortado Cruz Vieja, about 15 years old, Cream Cruz Vieja and PX Cruz Vieja, and the bodega launched their range at Vinoble 2014, as well as participating in many events during the European City of Wine celebrations. They also make vinegar, and Palomino and PX table wines. In 2018 they launched an Oloroso Reserva Fundacional drawn from three butts dating from 1789. All the wines have scored over 90 points from the various critics.


Visits? Yes, just get in touch and arrange something.
Posted by Paula MacLean at 11:34