Sherry lends prestige to Malt Whiskies. Distillers of some of the most important Whisky brands incorporate expressions such as "Matured in Sherry barrels" or "Aged in Sherry casks" in their labels, referring to the ageing of the spirit in butts seasoned with wine from Jerez. With the current boom in whisky sales, there has been strong growth in demand for these butts.

The Consejo Regulador is therefore worried that these terms could be misused, and that the name of Sherry, a wine protected under a Denominacion de Origen (DO), could be applied to labels of whiskies aged in barrels which have previously contained other, fairly similar wines. For this reason, the Consejo has started to look into the situation in order to regulate the practice and to avoid advantage being taken of Sherry by the whisky distillers or other wine producers passing the butts off as "Sherry" butts. There are quite a few wines with a reasonable resemblance to Sherry from Sevilla, Cordoba, Huelva, Malaga... There is nothing at all wrong with these, as long as it is made clear on the label. Indeed, some outside Jerez are considering setting up a small operation in the Jerez area to take advantage of being able to use the word "Sherry" for the butts.

The seasoning of butts for the ageing of (world) whiskies, rums - and of course, Spanish brandies, an 80 million bottle a year business - is a time-honoured practice in the bodegas of the Sherry zone and provides a profitable sideline, as these butts fetch very high prices. After all, they have been sitting in bodegas, absorbing wine, usually declassified for Sherry production, and which cannot be sold as DO wine (but could be distilled) after usually between one to two years' seasoning, as the wine tastes so strongly of the new wood. Currently there are tens of thousands of them - warehouses full of them. Scotch distillers are paying over £500 (@600 Euros) for such a butt - around £1 per bottle of finished whisky.

It should be remembered that until the end of the 1970's, Sherry - and most other wines - were exported in barrel and bottled at destination. There were thousands of empty barrels therefore in which to age whisky, but when that source dried up with the advent of local bottling in 1981, the distillers had to find new means of sourcing Sherry butts. New butts are therefore raised and filled specifically for the distillers, and this has had major consequences in terms of quality and price. Distillers now spend infinitely more on casks than in the past, and that has dramatically increased the quality of whisky, but at quite a price, (The Edrington Group alone spend 10 million a year on casks), and there is likely to be a shortage of casks in the not too distant future. One should also bear in mind that most whisky - well over 90% - goes into ex-bourbon barrels, so you get an idea of how big the barrel thing is. It makes or breaks a whisky.

Members of the Consejo were informed of the plans which  it has to create a register of official "envinadores" (or "cask seasoners") at the last plenary meeting a few days ago. While the Consejo cannot restrict people from outside the Sherry zone from seasoning casks, it can control the number of casks/butts seasoned in Jerez. According to the director of the Consejo, Cesar Saldana, the explosion of the whisky market has developed recognition of the quality and prestige brought by cask seasoning with Sherry. 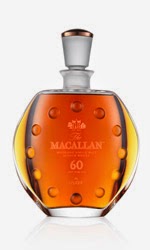 The distinguished sommelier, Jose Joaquin Cortes had no doubt that much of the aromatic complexity, character and sheer satisfying quality of the Macallan 1824 Series single malts was attributable to the Sherry butts the whisky was aged in. The Distillery itself is proud, not only of its Scottish roots, but of the quality of the Sherry butts it uses for ageing, and Bob Dalgarno, their chief whisky maker took the decision to use only top quality Sherry butts (made by the Tevasa  cooperage and seasoned with Gonzalez Byass oloroso for two years) to age these whiskies.

What is not yet clear, however, is whether certain terms like "Amontillado", "Pedro Ximenez", "PX", "Oloroso", "Fino" etc. will be allowed, given that these wines can be and are made outside Jerez. Would the Consejo permit a whisky to be labelled "aged in Oloroso casks"? My view is that they would have to, even though many might assume that the oloroso was Jerez. A whisky aged in a Montilla oloroso barrel, for example, should be perfectly legal if the label stated "aged in Oloroso cask".

There is some debate about whether the cask is American oak (Q.Alba) or Spanish (Q. Robur), the two having slightly different effects on a whisky, quite apart from the type of Sherry aged in them. Robur gives off more colour and tannin, and Alba more vanillin, so it really depends on the kind of whisky one is looking for.

Much work remains to be done on this, and there is only so much the Consejo can do. One thing they should do, if they haven't already, is to talk with the Scotch Whisky Association, the governing body of Scotch Whisky - the equivalent of the Consejo itself - and come to some sort of agreement - which they would need to publish.