Appearance
Deep amber, light old mahogany with bright orange glints and a trace of green at the rim.
Nose

Beautiful fragrant old Oloroso starting with traces of oak and more exotic woods like cedar used in cigar boxes, a leather tobacco pouch, and faint traces of cinnamon and marmalade. While fine Oloroso predominates, in the background there is a gentle hint of PX as if only the bare minimum was used to make the wine just about medium so it didn´t spoil the quality of the Oloroso.
Palate
Rich and fairly full bodied with a trace of caramel. The PX is slightly more apparent now and gives the wine a gentle raisiny fruitiness but it is definitely more medium-dry than medium, and the lovely Oloroso flavour, beautifully honed by bottle age, dominates with the finish being fairly dry - and very long. It has a very attractive warm open texture and for all the aromas of wood there is no tannin, in fact it is very smooth.Delicious.
Comments


At Christmas time back in the 1960s my grandfather in Spain used to send us a present of two wooden wine boxes, one containing all sorts of Spanish delicacies like tins of partridge in Rioja wine sauce and various seasonal sweetmeats like turrón, polvorones and pasteles de gloria. The other box contained 12 bottles of Garvey Long Life Sherry. You can imagine the pleasure in receiving a bit of Spain at Christmas, and how thrilled I was to find this bottle which took me straight back to those happy days. Armando reckons this bottle dates from the 1980s, but it could be from the 1970s, in which case it just could be pre-Rumasa which bought Garvey in 1978. The bottle contains 70 cl. which is fairly typical for the pre - EU 1970s - 1980s and on its base appears the number 81 which might be the date. It also has nicks in the upper label edge which would accurately date it if one only had the card. Anyway it is a Sherry of real quality, produced mainly for the export market, but not for many years now unfortunately.
Price
30 euros, Er Guerrita 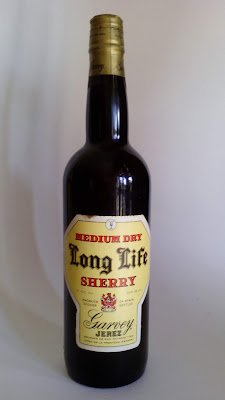