Nose
Attractive and quite elegant and aromatic with slight but distinctive notes of coffee and cacao along with hints of the usual Oloroso and traces of vanilla and woodiness from the American oak. There are also hints of date, caramel and brown sugar so in all the aromas are fairly sweet.
Palate

Quite intense and fairly sweet with date, prune, raisin and brown sugar flavours predominating over the coffee and cacao but the spirit cuts through them all giving a degree of balance. Then all these components seem to marry into one complete flavour in a long tasty - if very slightly sweet - finish.
Comments
Imperial sounds a little posh for a mere Brandy Solera, but it is remarkably good. Sandeman products were for a while produced by Garvey which was merged in the Rumasa era with Zoilo Ruiz Mateos who had the production contract for Sandeman, which has not made its own Jerez products (though it still makes its own Port) for some time being a sous-marque of Sogrape in Portugal. Anyway Garvey probably used the original soleras which have presumably been moved to Fundador which is now producing the brandy under licence. It was solera aged for about one year  and contains a fairly standard 12 g/l sugar, and unusually has 40% alcohol when most Solera brandies contain 38%, but it works well - every spirit has its optimum strength. Good though it is, it is a bit expensive, but then it is not widely available.
Price
22.80, Licores Corredera 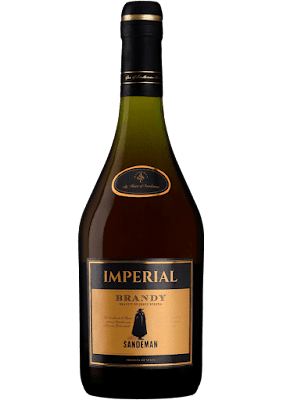