Appearance
Chestnut to mahogany fading to amber with gold and copper highlights.

Nose
There are aromas of oak and brandy-soaked wood, nuts too, like toasted almond and chestnut, then salted caramel which gives it a hint of sweetness which rounds off faint traces of old, possibly fairly astringent Amontillado, but the finishing can´t have been terribly long so there are only tantalising hints of this old wine, but enough to add complexity. Very attractive.
Palate
Full, almost rich, and beautifully rounded at first with a gentle sweetness - if anything just a fraction too much - then some toasted almond and hazelnut Amontillado character comes through along with a faint salinity. It is very smooth and characterful, no bitter tannins, with very good length.
Comments

This is one of two new additions to the range of Carlos I brandies from Osborne; this Amontillado and a Pedro Ximénez. The brand of course once belonged to Domecq and was established in 1889. It was named after king Carlos I (1500-58), who reigned during the early part of the conquest of the Americas, because its flavour was so good it also would be a conqueror. The range now has five versions. This one consists of Carlos I finished in  very old (over 100 years) selected butts from an old Amontillado solera "La Honda" established in 1857. The term "finishing" means that most or all of the ageing is carried out in the usual butts, but the brandy then spends a little extra time in really special butts to enhance its character even further.
Price
37.90 Licores Corredera 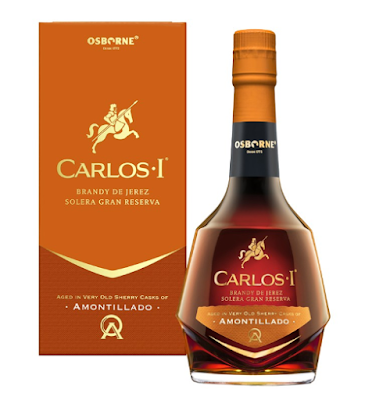