Appearance
Quite deep polished mahogany with copper highlights and a faint trace of green at the rim.
Nose

Crisp and full with notes of long years in oak, Oloroso, toffee, walnut, date and traces of vanilla and orange peel. There is a slight hint of sweetness, but not enough to hide the spirit itself, and overall it smells reasonably old and those crisp oak notes really give it punch.
Palate
That hint of sweetness balances the old oak and a little tannin rendering it less aggressive, but there is a certain grip which gives a dry edge. Brown sugar, dates, Oloroso give it enormous flavour and the 40% alcohol helps too. This is a big, quite powerful brandy with no shortage of character.
Comments
Garvey is a shadow of its former self. Established in 1780 and once one of the leading bodegas, it was all but ruined by Rumasa and later Nueva Rumasa and the 5 years it took to sell the firm. Large amounts of stock were sold off by the receivers just to pay the bills and keep it limping along, but in 2017 Andrew Tan, who is a brandy magnate, bought it, so we´ll see. Garvey has been involved in brandy since the early XIX century and their Esplendido brand was once a best seller. Renacimiento means "rebirth" in English, somewhat ironically, and was their  upmarket brand, but now it is the 60 year old Conde de Garvey. Nonetheless, Renacimiento has a pretty decent average age of around 25 years, and comes from a XIX century solera, though not much is bottled these days.
Price
40 euros, Licores Corredera 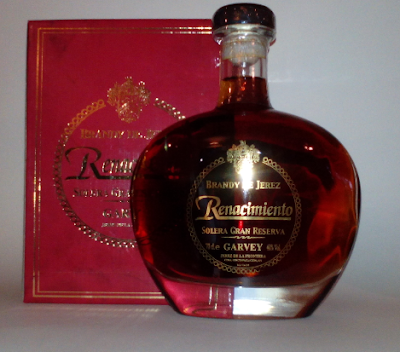