Appearance
Deep mahogany with copper highlights and the faintest trace of green at the rim.
Nose

Rich and smooth with aromas of walnut, fine old oak butts, brown sugar, and hints of vanilla, dried orange peel, Oloroso and traces of fruit cake and raisins, possibly from PX. It is extremely harmonious in a way that only sufficient ageing can achieve, and most attractive.
Palate
It is rich and very smooth on the palate as well with a hint of sweetness rounding it off nicely without obscuring anything. Added to that there is a good "winey" fruit along with those orange and raisin notes and the faintest  hint of rancio without any aggressive wood tannin. A very fine brandy; smooth, tasty and very long.
Comments
Diez-Mérito was the result of the 1979 merger of Diez Hermanos (est 1876) and Marqués del Mérito (est 1862). It was taken over by Rumasa in 1981 and merged with Pemartin and Bertola and the group was bought in 1985 by Marcos Eguizabal whose heirs sold the firm to the Espinosa family. The brandy solera dates back to 1819 and had been bought by Mérito in the XIX century. It has been sold under various names over the years, and Eguizabal had renamed it Conde de los Andes, but it is now back to its original name and sold, at least until very recently, in various versions: 15, 25 and 35, but there numbers are being removed as people thought they referred to the age of the brandy, but they don´t. In fact nobody seems very sure what they refer to. The different label colours are sufficient to signify a difference. Anyway this brandy is pure holandas and over 5 years old, though I suspect it is much older and even better than that, presumably because of the age of the solera.
Price
30 euros ex bodega 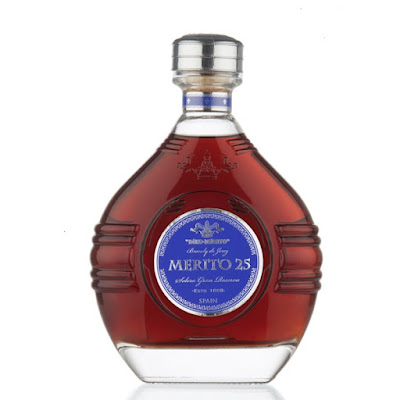