A coalition of growers in the Marco de Jerez is beginning to take shape. Independent growers and those who are cooperative members are in agreement on the need to join forces to make the vineyards profitable and guarantee their viablility and such an alliance would have the support of both parties, as was demonstrated at the first meeting of growers to address the possibility of concentrating the supply of grapes and musts in order to increase the price from the current unsustainable level. They will meet again at the end of the month to cement their alliance before the next plenary of the Consejo Regulador.

The meeting, called by the growers´association Asevi-Asaja, was attended by the presidents of the seven cooperatives of the area and included representatives of the Artisan Bodegas of Sanlúcar. The process will go beyond concentrating the grape and must supply to increase their activities to presenting a united front in matters of concern to the sector, which will be debated at the Consejo. The president of the independent growers, Francisco Guerrero, explained that the idea is to rekindle conversation between the independents and the cooperatives so as to raise the grape prices and reestablish the close links between the two parties which were broken after the sanctions imposed by the CNMC (competition comission) for practices which it alleged were contrary to free trade. 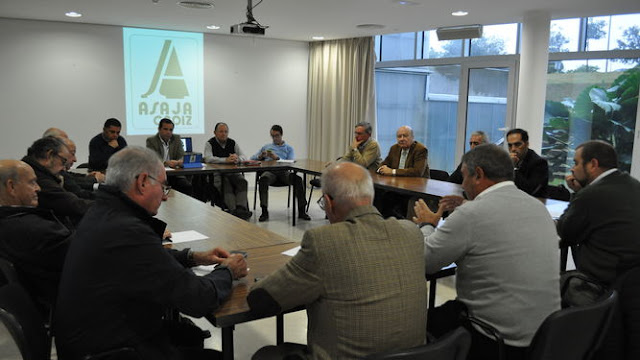 “There is good mutual understanding” said Guerrero at the end of the meeting, during which there was talk of seeking complete integration of the producing sector according to the spokesman for the cooperatives, Francisco Lorenzo. In the view of Francisco Galán, vice president of Asevi and executive member of Asaja-Cádiz “the meeting went very well; the sector is going to unite, and not just to make the vineyards profitable”. For this reason another meeting was arranged for the day before the next plenary at the Consejo which is expected to be on the last Tuesday of November.

The idea is to bring about an increase in the price of the wine from the bottom up, to revalue the Palomino grape. “The proposed concentration of supply makes sense because we are all in the same boat”, continued Galán, who said that “the next meeting will be to determine a form of legal framework for our association to dig us out of the deep hole we are in. The main point is to unite and raise prices since we cannot continue to sell our production below cost”. Asevi are hoping to reach an agreement with the association of bodegas, Fedejerez, to increase the price of the Palomino which at 0.36€ the kilo is the lowest in Spain as the growers announced in a recent press release. But before meeting with the bodegas the growers and cooperatives want to have a concrete form to their association.

The fundamental problem, and it it is an important one, is that the Sherry business has a surplus of some 20,000 butts of wine, and this comes less than a decade since it was thought that a balance between supply and demand had been achieved by the uprooting of vines which reduced the area under cultivation from 10,000 hectares to the 6,500 which remain in production.