The report was commissioned by the Consejo Regulador after a written complaint from Delgado Zuleta, and the cooperative Virgen de Palomares, which was filling the BIBs with Manzanilla “La E” for Bodegas Argüeso, who were then selling it as “Fino La E” has now ceased doing so. The authors of the report found it shocking that a wine from a bodega in the ageing zone, which therefore has the characteristics of a product protected by the DO, should be packaged in the production zone as it thereby loses its right to that protection. It seems to have been intended that the wine appeared to come from the production zone and for two reasons: to be able to sell it in BIB, and to sell it as Fino which are plainly illegal. 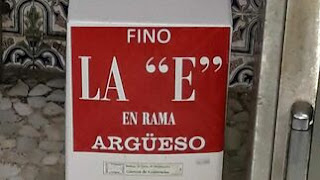 The reason it is illegal is set out in section H4 paragraph 6 which says that wines from bodegas in the production zone must state which area in the zone they come from (as specified in Annexe 3 of the regulations) and that at least 85% of the grapes used to make them must come from that area. Paragraph 6 also states that the use of names like Fino or Oloroso for production zone wines can only be used with prior permission from the Consejo Regulador. The simple fact that a wine from the ageing zone is bottled in the production zone does not make it a wine from the production zone, and so the bottling requirements for DO wines remain valid in this case, and that means glass.
Posted by Paula MacLean at 13:57