An Interview with Willy Pérez of Bodegas Luis Pérez

Guillermo (Willy) Pérez’ surname not only shows his ancestry, but also the continuity of a family business forged by the drive of its founder, a visionary who wanted to change things but to do it in the origins of the world he loved, the very heart of viticulture: the vineyard. Luis Pérez, father and son, are the soul of the business, established in 2002 and located not far from Jerez.

“The project stemmed from my father’s enthusiasm for trying to change things and doing it from the vineyard in a way which has been lost in the area in recent years. Starting out was hard; we are a wine family and we invest everything into wine, so we had to give 100%. We did everything, from the vineyard to the bodega. Let’s not deceive ourselves, they were hard years, going off with a bottle under one’s arm to try and convince the world that Andalucía could produce red wines of quality. At the start nobody wanted to know. They said to us “how are we going to sell a red wine from Jerez which is more expensive than a Rioja?” 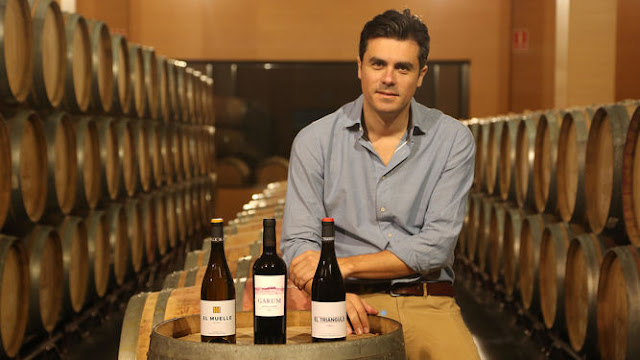 How did the idea come about of making red wine in Jerez?
Not many people know that in Andalucía, and particularly in Jerez, a great diversity of wine was produced in the past, including red wine. All we had to do was recuperate that tradition, doing it as well as possible and searching out the land most suitable for each grape variety. Oddly, acceptance first came from tourists who wanted to try the various wines produced in the area. So little by little the restaurants began to feel more comfortable with these new wines. Some even began to put Andalucía at the top of their wine lists, while they put other DOs like Rioja or Ribera del Duero in second and third place. What seems normal now was pretty risky 15 years ago, and we should be grateful to those pioneers.

Do you have some particular secret?
We don’t have any particular formula. Our methods of winemaking are simply to try and obtain the best possible quality. Every plot has its own requirements so we need to do things slightly differently. There are many thousands of wines in the world but the great majority are much the same due to globalisation of winemaking. The difference comes from the vineyard, whether it is better or worse than the others, it is different, and that needs to show through the wine to give it its own style, recognisable and inimitable because the vineyards are too.

What are your next projects?
Fifteen years ago we started out with no limits. We were very keen to try different styles with internationally recognised grape varieties, and it worked out well, making wine with no barriers. Later, as the years went by, we were developing better knowledge of the individual terroirs and how the grapes were adapting to each plot, and also a sense of responsibility to recuperate traditional local grapes. In 2011 we finally made a red from the Cádiz variety Tintilla, and this year we are launching two new wines: El Triángulo, another red from Tintilla, and El Muelle de Olaso, a white made from palomino.

Is the Tintilla a better grape for being Andaluz?
It is not so much whether it is better or worse, it is different. But there is no doubt that it is very suitable for making fresh elegant reds. That is the current fashion in red wines around the world; it has changed from concentration and structure to a lighter style with a lower strength. There has always been fashion, even in wines.

And the Palomino? Can great whites be made from this variety?
Palomino is a very versatile variety. We know it is capable of making excellent fortified wines, but it is often said that it is less suitable for making expressive white wines, although we think this is due to high yields, and returning to yields more like those of the XIX century and using classic techniques it is perfectly possible to make more than interesting white wines.

Was everything done better in the past?
No, not at all. But curiously Jerez reached a point where wine production became so advanced it was breath-taking. Looking back and seeing how highly trained people created such an important legacy gives you an extra responsibility with your land. They innovated and now we have to do so as well, but we are the first generation which has to know the history of it all so we can retain the good ideas and not repeat the mistakes.

Is it true that Jerez is undergoing a minor revolution?
Well, I’m not sure if it is a revolution or not, but good some very good things are certainly happening which will affect us all in the future, one way or another for sure. New wines have begun to appear which only five years ago would have seemed impossible. People like Forlong, Cota 45, Callejuela, Primitivo Collantes, Armando Guerra, Vinifícate, Alba and many others are setting up projects based on the vineyard, and so are the most traditional bodegas who are doing important work for quality. You get the impression that the cycle of the previous crisis of a century ago is repeating itself when an explosion of creativity and commitment managed to take Jerez forward once again. History does repeat itself.

How do you see the future?
I like to be positive. I would like to see a future where the big bodegas labelled their wines with the name of their best vineyards, but above all I want to think about the many small producers who only make a few bottles from their vineyard, but enough to live well, to live wine.

This interview appeared in the Diario de Jerez 22/5/17