The Montpensiers, Benefactors of Sanlúcar

A French prince and father of a queen, Don Antonio María Felipe de Orléans y Borbón Dos-Sicilias, Duke of Montpensier (1824-1890), was never able to achieve what most historians refer to as his obsession: to be King of Spain. The closest he got was his marriage to the infanta Doña Luisa Fernanda de Borbón (1832-1897) at the royal palace of Madrid in 1846, a double political alliance since Luisa’s sister, Queen Isabel II of Spain, married her cousin, Don Francisco de Asis de Borbón at the same celebration. Isabel continued to rule Spain, but Antonio would spend most of the rest of his life there, residing in Sevilla and their great discovery, Sanlúcar, where they spent long summer seasons and became symbols of prosperity for the town and its inhabitants.

Don Antonio was the tenth son of Louis Philippe I of France and María Amalia de Borbón Dos-Sicilias. He arrived in Andalucía in 1848 after a revolution which ousted the Orléans in France, and it was the Spanish government, rather than Don Antonio and Doña Luisa themselves, which decided they should reside in Sevilla, away from Madrid, as it was aware of his pretensions to the throne.

Doña Luisa took an interest not only in Sevilla and its surroundings but in the other towns of Andalucía. So on the 11th November that year they set off on a trip to Cádiz and its seaports, sailing down the Guadalquivir from Sevilla to Sanlúcar, where they were greeted with a spectacular civic reception. Since the local council could not afford this, funds were raised by popular subscription. Everyone contributed to the substantial costs, but it would prove to be an excellent investment as Don Antonio was much taken by the town, which became his favourite place for holidays.

In the summer of 1849 the Montpensiers stayed at finca El Picacho, and their influence and presence in the town were obvious from the start, creating a perfect symbiosis between the townsfolk and the royals. In times of unemployment they found ways to provide work like in the very hard winter of 1855, and also supported the poor, but above all they made the town into a summer residence for the aristocracy and bourgeoisie of Sevilla and Cádiz, putting Sanlúcar firmly on the map. In return the town was faithful to them and unshakeable in its affection. The Montpensiers’ greatest legacies were the Palacio De Orleans, a magnificent house they built in a marvellous mix of architectural styles with beautiful gardens, now the city council building, and the purchase of the botanic garden, for which they provided a water supply.

Sanlúcar benefitted in many more ways however. The transport service between Sevilla and Sanlúcar on the Guadalquivir increased greatly during the summer months, and this required works to improve navigability and the quayside at Bonanza which were carried out by the Guadalquivir Navigation Company, of which Don Antonio was a major shareholder. He was also involved in the improvement of the roads to Jerez and Chipiona and the arrival of the railway. He persuaded the government to extend the mail service to Sanlúcar, and this began in 1852. 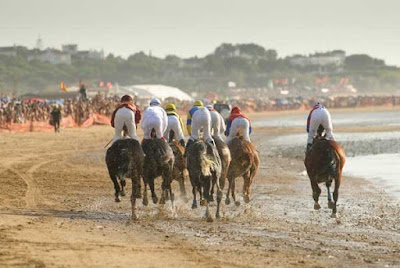 Back in 1845 a group of distinguished Sanluqueños had created the Society of Horse Racing of Sanlúcar de Barrameda to promote the Andaluz breed of horse which was very useful in agriculture. Don Antonio, a consummate horseman, lover of horses and owner of one of the best stables in the south of Spain immediately joined up and helped to promote the society, which still holds the races on the beach to this day. He also attracted visitors from other royal houses such as Eugenia de Montijo in 1853, the King of Portugal in 1856 and Queen Isabel II in 1862.

In 1943 descendants of the Montpensiers established Bodegas Infantes de Orleans Borbón in Sanlúcar which are still in business though now owned by Barbadillo. Over the years the family had a profound and beneficial effect on the town, even though Don Antonio never realised his dream. Alfonso de Orleans Borbon realised his however, establishing a motor racing team in 1999.

Translated from an article by JM Aguilar in La Voz Digital
Posted by Paula MacLean at 17:18