Appearance
Bright golden lemon yellow with golden highlights.
Nose
Fresh and fairly full and zesty with attractive aromas of apple, strewed apple, apricot and hints of pear and candy along with  faint notes of salinity from the yeast. It has the generosity, ripeness and roundness one would expect from Añina which is nearer Jerez than Sanlúcar, but is very fresh.
Palate
Very similar to the above really; just shy of crisp and well balanced with the classic dry chalky albariza texture and also that of appleskin, with some roundness and generosity coming through. It is very clean, dry and fresh with plenty of character despite minimal flor and has some potential for ageing and improving for 2 or 3 years.
Comments
Produced from 100% Palomino grapes grown in the family´s own vineyard Las Cuarenta (40) in the pago Añina, from vines of over 30 years of age, fermented and aged with minimum flor in a single butt. Rafael is a third generation "mayeto", the sanluqueño word for grower-producer and the soil of Las 40 consists of the tosca cerrada type of albariza. Being the produce of a single butt, only 600 bottles were filled. 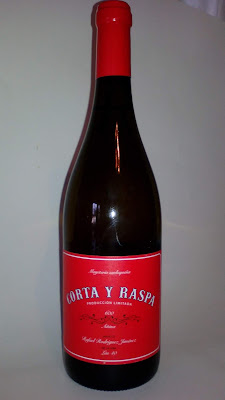