This firm started with León de Argüeso (1801-1880) who came from the small town of Arija (Burgos) and arrived in Sanlúcar in about 1820. Here he started with a shop selling goods imported from the Americas (ultramarinos) and gradually established a bodega. Thanks to his purchase of old soleras and hard and diligent work the firm prospered and so did he. Being a lifelong bachelor he left it to his two nephews, Juan and Manuel and one niece, Francisca who renamed the firm Herederos (heirs) de Argüeso (see separate article) and took it on to even greater success. It still bears that name today, though since 2016 is has been owned by Francisco Yuste.

One of the herederos was Manuel de Lucio y Argüeso (1822-1893), son of Don León´s sister Maria. Having worked extensively in his uncle´s bodega, he had the necessary experience to run the firm on behalf of the others. After his death, in 1894 the remaining heirs continued with Herederos de Don León Argüeso and Manuel´s nephew, Manuel de Argüeso y Lucio, set up his own bodega, registering it under the name of Manuel de Argüeso with a bodega in Calle Banda Playa in 1905. At its peak it contained 1,885 butts of wine and also produced spirits and liqueurs. The trademark featured a lion (león) rampant holding the Spanish arms surrounded by medals and the business thrived principally as an almacenista. In 1942 his nephew, Manuel de Argüeso y Ríos, who was now running the firm, (Manuel never married - a bit of a trait in the Argüeso family) bought the firm of Gutiérrez Hermanos which had bought the firm of Juan Carrasco Hermanos in 1916 and whose operations were based at the Carrasco bodegas in Calle Cartuja, just by the railway station in Jerez. Manuel changed the name of the combined firm to Manuel de Argüeso SA.

One of his major clients, particularly for Manzanilla, was Valdespino who eventually bought out the firm in 1972. They still offer a couple of the Argüeso brands, namely PX El Candado and Manzanilla Señorita, now no longer Olorosa but Fina. Valdespino was of course itself bought out by Estévez in 1999, but these brands are still available. 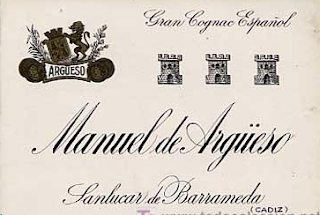