With the recovery of the vineyards after Phylloxera and growth in sales, it was a propitious time to found a bodega. Miguel Cala Ramirez, born in Jerez in 1893, established his in 1918 in Calle Angostillo de Santiago opposite the parish Church of Santiago. Here he operated as an almacenista, producer of spirits and exporter. His brands included Fino Genaro, Fino Paquita, (named after his children), Fino Angelita, Amontillado Polo, Jerez Quina Cala and Coñac Isabelino. He was associated with or owned various well-known bars and tabancos in Jerez, three of which were La Bodeguilla (still going), La Perla (still going since 1889) and La Reja (still going since 1942) to which he supplied the wines in bulk.

In 1944 he associated with Francisco Espinosa de los Monteros y Córdoba, born in Jerez in 1895, who had taken over an old bodega in Calle Puerta del Sol in 1930. This bodega had been established in 1884 as Bodegas Sol and is now Bodegas Blanca Reyes, still going in the hands of the Espinosa de Monteros family. He was known for Fino Perla, Amontillados La Perla, San Francisco and 1800, Oloroso Viejísimo as well as Anís Español Los Monos. The new firm was known as Cala & Espinosa and supplied wine mainly in bulk to various bodegas, bars and tabancos. 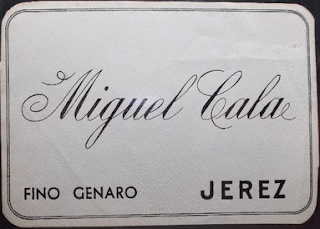 It didn´t last long however with the partnership being dissolved as early as 1949 and the partners going their own ways and their respective bodegas carried on as before but only the Espinosa one, Blanca Reyes, is still in business today. The Cala bodega, or rather its stocks, were eventually sold to González Byass in the 1980s.