Appearance
Very deep intense blacky mahogany fading through amber to a faint trace of green at the rim.
Nose
Classic old Oloroso, fairly concentrated and quite crisp and tight with distinct notes of walnut and old oak along with hints of old antique furniture  and exotic woods and even faint balsamic nuances and a suspicion of incense.
Palate
Full bodied, well structured and fairly tight with real personality. Tannins, which are not aggressive, are balanced by glycerine and there are faint suggestions of spices like licorice and cinnamon. This is a big, serious wine and has great length.

Comments
This wine comes from a 15 butt solera which came about as the result of an agreement in 1981 between the then owner of the Tabanco San Pablo, Anastasio Muñoz "El Nene" and Valdespino to set up a small solera. The butts were filled with a sobretabla fortified to 18% which originated in the Corregidor Viejo vineyard and they have only been topped up since to replace the merma (evaporation loss), hence the hefty style of the wine. The tabanco was originally a bodega until the 1930s, so it is fitting that it has its own wine.

Price
Not bottled but well worth 3.50 a glass. 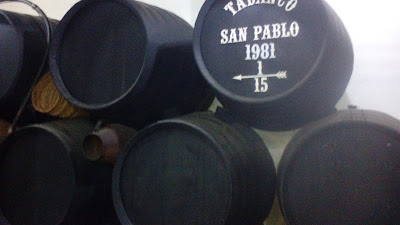