Appearance
Lightish amber with bright golden highlights.
Nose
On the light side, fresh with a certain crispness due to a notable content of column still spirit, slight hints of Oloroso and oak barrels. It is fairly basic brandy but very much Jerez nonetheless. There are traces of brown sugar, caramel and very faint rancio and dried fruit notes.
Palate
Light and fairly crisp at first then it opens out a little giving off  a certain lightly caramel sweetness with mild Sherry and faint oak notes which leave a faint hint of tannin. It is not particularly sophisticated yet there is nothing wrong with it and it is remarkably easy to drink on its own and is ideal for cocktails and mixed drinks.
Comments
This brandy was introduced in 1902 and distilled from Airén grapes at Domecq´s own distillery in Tomelloso, La Mancha. It probably consists of not much more than the required 50% holandas with the rest coming from column stills and was aged in solera using butts previously seasoned with Oloroso and has a probable average age of about a year. It was not terribly different to Fundador though perhaps slightly inferior yet it sold in huge quantities mainly in export markets. "Tres Cepas" translates as "three vines" and shouldn´t be confused with Tres Copas (three goblets) from González Byass. Both have long disappeared from the Spanish market but Tres Cepas is available in Equatorial Guinea, the Philippines (a huge brandy market) and parts of Latin America, though completely re-packaged and labelled as "light". The policy of current brand owner Emperador seems to be to make as many versions as possible of their well known brands - there are now 11 versions of Fundador!
Price
20 euros per litre, Mantequería Jerezana 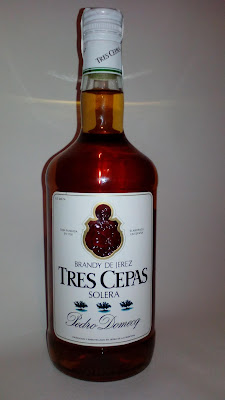