Very deep browny mahogany with reddy coppery highlights fading to amber with a faint trace of green at the rim.
Nose
Full, rich and forthcoming with decidedly PX notes of dried fruit like dates and raisins and faint notes of caramel, molasses, coffee, toasted almond, walnut and a faint trace of cacao and a fainter still trace of rancio. There is a certain element of sweetness which balances nicely with notable oak aromas some younger than others but overall a lovely nose.
Palate
Full bodied with a certain sweetness which is very attractive due mainly to caramel, vanilla, chocolate and dried fig. The tannic elements are well contained by the inevitable sweetness of the PX but the spirit shines through and it all works harmoniously at the very long finish.
Comments
This excellent and fairly recently launched brandy is basically standard Carlos I but with extra ageing - or "finishing" as the whisky people say - in very old butts selected from the Pedro Ximénez solera established in 1902. The Carlos I solera dates back to around 1889 and the brandy was originally produced by Pedro Domecq but the brand was sold to Osborne in 2008. It is made from 100% Airén grapes grown, vinified and distilled in pot stills at the firm´s own distillery in La Mancha and aged in soleras in the firm´s Bodegas del Tiro in El Puerto de Santa Maria. The effect of the PX on the brandy is very marked yet it is not too sweet and it works extremely well with lots of depth and flavour. 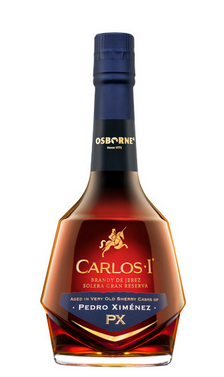