Richard Davies (London 1809 – Cadiz 1870) began by shipping Madeira. He did well enough to become the owner of the famous vineyard there called Ribeiro Seco, adjacent to which he also owned the villa and gardens of La Vigia, where the Empress of Austria once stayed.

He married Mary Ann Hobson (1814-?) with whom he had 9 children, many of whom died young. One son, however, continued in Madeira under the name Oliveira Davies, while another, Richard Henry "Harry" Davies (1840-1891) worked with his father at the bodega they established in Jerez in 1863, situated close to the bullring. Being involved with Madeira and Sherry was not uncommon in those days. He rented the fine Torre Breba vineyard at Sanlucar from the Duc de Monpensier. 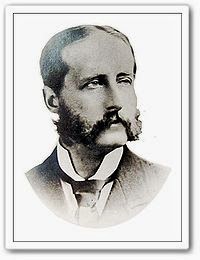 In 1870, Richard Henry Davies, who lived at Calle Porvera, 3, took over the business on his father’s death. He married Clara Penfold (1840 – 1928). When Vizetelly visited at vintage time in 1875, R Davies was one of the bigger shippers. At that time, Torre Breba had 84 hectares in production, which required 200 men to pick, for which they received 8 reales per day. The vineyard yield was some 700 butts – or in modern terms, about 42 hectolitres per hectare - small by today's standards. The firm also owned the finca El Olivar de Buena Vista. Sherry was made in a bodega in Sanlucar and aged in Jerez, and it is possible they also had a bodega in El Puerto

Like many of the British community in Jerez, he was a bit of a sportsman and was involved with the founding of the Jerez Polo Club and Jerez Jockey Club along with Pedro Nolasco Gonzalez Soto (member of the Gonzalez Byass family and later Marques de Torresoto). Davies, along with William Garvey had excellent studs which provided fine thoroughbred racehorses. He was also the British Vice Consul till his death in 1891.

Richard Henry and Clara had five children, of whom the elder, Ethel (1861-1941), married Robert William Byass, grandson of Robert Blake Byass, and a member of the firm of Gonzalez Byass. Their son, Reginald Cyril Byass (1887 – 1960) went on to run the London offices of GB. Clara (Penfold) Davies, who had  run the firm after her husband's death in 1891, transferred it to their other son, DH Seymour "Don Simo" Davies in 1897. He was British Vice Consul in Jerez from 1892-1900 and director of the Jerez Lawn Tennis Club.

After a fairly short but successful career, the firm was sold off in the 1920s. Seymour had lost interest after his only son, Richard Henry was killed at the battle of the Somme during WW1 in 1916.

Some of their brands were:
Amontillado La Novia, Finos and Manzanillas from Torre Breba and some very old wine from the Don Miguel Viton solera

I am grateful for much of this information to historian and researcher Jose Luis Jimenez, (a true Jerezano) and to Mark Davies, great grandson of Don Simo.