This famous firm is one of the oldest bodegas in Jerez, and the oldest of the almacenistas. It was established in 1800 by Don Antonio Maria de Aranda y Cardenas, the great grandfather of Pilar Aranda. Don Antonio had four children: Carlos, Felix, Pepa and Fermin. Fermin became a very famous surgeon, and was often invited to speak at medical conferences. At one such in 1924, attended by King Alfonso XIII, he extolled the virtues of Sherry so well that the following day, 1200 of those at the conference visited Jerez! Medical man though he was, he looked after the family bodega and expanded it. He even experimented briefly with growing tobacco. A street was later named after him (the old Calle Medina). 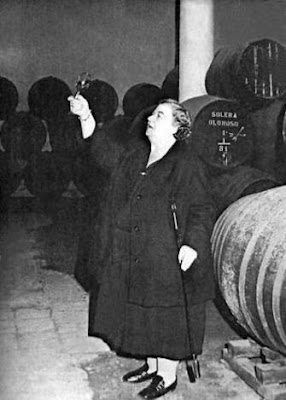 A republican and the owner of vineyards – he came to own four fincas: La Rosa Celeste, La Blanquita, La Huerta de la Marquesa and  La Venta Cantero - and of course the bodegas. He spoke three languages and was known for his charm. He married Dona Pilar Latorre Nieto, and they had four children: Antonio, Fermin, Jose and Pilar, born on the 11th of July 1907.

It was Pilar, widowed young - her husband was killed during the Spanish Civil War - who inherited the bodega containing some 500 butts on her father’s death on the 1st of May 1946. Along with her sons and the accountancy skills of her cousin Guillermo Ferguson’s stepson, she continued with the winemaking. She was a woman ahead of her time, possessing grace and spontaneity as well as an excellent knowledge of the workings of a bodega, and great skill as a taster. With a great sense of humour and agility of mind, she was well known and respected not only in bodega circles but also in public. 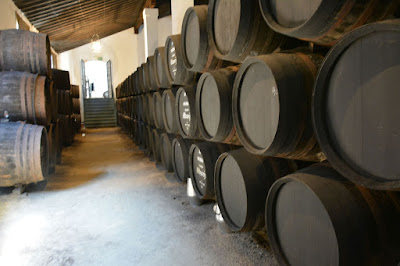 Pilar had seven bodegas, but three were rented out. The other four contained about 700 butts. She worked a lot with Manuel Maria Gonzalez Gordon of Gonzalez Byass, buying mosto from them and selling them back matured Sherries, in fact 85% of her bodegas output was sold to them for their blends, the rest being sold to Emilio Lustau – such as a lovely Amontillado Fino - to be bottled unblended and sold bearing her name as well as that of Lustau. One treasure in the bodega was an ancient PX, well over 100 years old, which has been aged statically in only four butts, but it is almost impossible to procure any. There is also some outstanding vinegar. 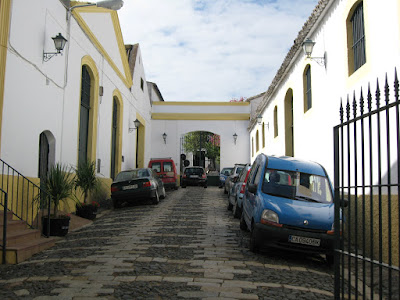 In 1975, at the Harvest Festival, the Consejo Regulador named her “Capataz de Honor” in recognition of her dedication to Sherry. As she grew older, her grandson, Fermin Garcia Villaescusa managed the business. A trained enologist with experience, he is also an artist, and perhaps his greater interest lay there. Dona Pilar passed away in 1997, aged 90, and in 1999 the firm was sold to Alvaro Domecq, a member of that famous bodega family (qv). In 2006 a street in Jerez was renamed in her honour. 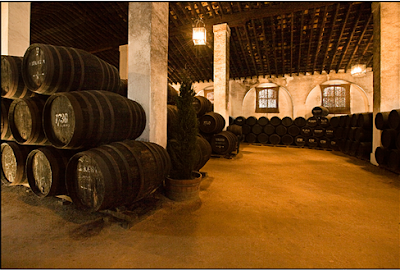 It is hard to say whether or not this is a lost bodega, but many changes have certainly been made. The firm now markets the brands based on the existing soleras, but is now part of a big financial group. Lustau is no longer bottling the wines.

Her brands were:
Fino La Janda
Oloroso Alburejo
Cream Aranda
These brands have been continued by Alvaro Domecq along with some very old wines which are now  as the 1730 range.