The name Ysasi originates in the north of Spain, in Vizcaya, the Basque country. The Y and the I are interchangeable, and confusingly you see both spellings on labels (as below).

Gregorio de Ysasi y Tricio was a bodeguero in Jerez, known for good Finos and Amontillados. He married Juana de Dios Lacoste y Biñalet (1792-1888) and they had 22 children. Manuel de Ysasi y Lacoste (1810-1854) was the elder of them. In 1850 he went to London to try and sell the family wines, and was named honorary Spanish Consul. His claim to fame is that he was instrumental in the establishment of the Universal Postal Union. He travelled a lot, but was drowned after giving a woman his lifebelt in a shipwreck. 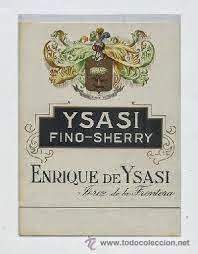 Another son, Luis de Ysasi Lacoste, became a successful businessman and philanthropist. On his death in 1902, he left the Finca El Retiro to the citizens of Jerez to be used as a park with a library.
By the mid 1850’s Ysasi had a fine reputation but their fortunes were on the wane and the business had eventually to be sold. Some soleras were acquired from Enrique Ysasi by Wisdom & Warter in the mid-1850s and others by Diez Hermanos, established later in 1876, such as the Oloroso Victoria Regina, both of the latter firms were therefore established on XVIII C soleras.

The bodega was visited by Henry Vizetely in about 1875, and he commented “To reach Señor Ysasi’s bodegas one has to pass through some of the more curious among the old streets of Jerez, where elaborate escutcheons figure above the ornamental doorways of the principal houses, and stone pillars with richly carved capitals decorate many of their corners. The Ysasi bodegas, being somewhat old-fashioned, are in keeping with these picturesque surroundings, and Señor Ysasi’s wines, notably his Finos and Amontillados, if not of a like remote antiquity, are thoroughly well matured and of high quality.” 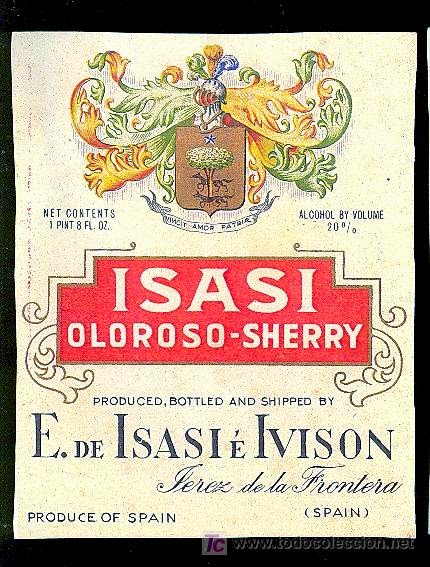 Enrique Ysasi e Ivison (1899-1983) was the son of Enrique Ysasi Gonzalez and Petronila Ivison Pastor. He was a writer and photographer as well as a bodeguero, and known for his book “Con Una Copita de Jerez”, as well as being a director of Wisdom & Warter from the time of its purchase by Gonzalez Byass in 1929. He was also an enthusiastic promoter of the Jerez motor racing circuit.


A central street was named after Juana de Dios Lacoste in 1888 for her tireless charity work. In this street once stood the bodega of Parra Guerrero and the (in)famous Tabanco del Duque, now in ruins. There is a good bar/restaurant here called Taberna del Segura. A street was also named after Luis de Ysasi Lacoste, Juana' son, a street formerly named Baño Viejo.