The Sherry production zone is in the north west of the province of Cadiz and north of the city, broadly between the rivers Guadalquivir and Guadalete, and consists of a triangle of towns. Jerez de la Frontera is about 20 km inland from the Atlantic, and the other two are coastal; Sanlucar de Barrameda in the north at the mouth of the Guadalquivir and opposite the famous marshy nature reserve called Coto Donana, and Puerto de Santa Maria in the South at the mouth of the Guadalete. 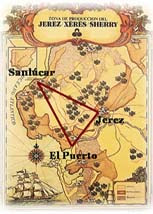 The landscape is low-lying, rolling country, much of it protected, dotted with small lakes and cork trees - not to mention lots of wind farms which are rarely overworked. Currently the Sherry vineyards cover 8,800 hectares and are located at modest altitudes from about 0 - 150 metres above sea level, generally facing south east. The land here was once under the sea and is made up of marine sediments, principally limestone and clay with lots of chalk, and sandy areas near the coast.

The chalky areas, known as "Albariza", which make up some 62% of the vineyard, are ideal for the Palomino, the main grape by far for Sherry production. The albariza has great properties as a soil, as it acts like a sponge absorbing the winter rains, and dries on the surface in summer, retaining that water. It can be incredibly muddy and slippery when wet and blindingly bright white when dry. Also it can be quite pure with up to 40% calcium carbonate, the rest being clay and silica from long extinct shellfish. Soils such as these are easy to work for humans, and easy for the vines to extend their root systems. Most of the famous "Pagos" or top vineyards, of which there about 300, are to be found on albariza.

The heavier clay soils, called "Barros", and the sandy coastal soils, called "Arenas" accommodate the less fussy grape, the Moscatel. It is happy on any old soil. The other important grape, the Pedro Ximenez - or PX - is generally found on albariza. Below left is a shot of albariza banked up to catch the maximum winter rain. This is called "aserpiado". In the spring, the soil will be levelled off again. Below right is a shot of the 3 soil types, showing just how white is the albariza. 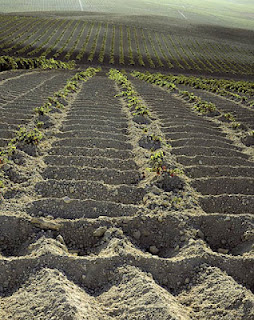 The climate in these parts is another major factor in Sherry production. Jerez is close to parallel 36 north, and is actually not far from Africa, so the summers are hot, up to over 40C and dry with mild winters supplying about 600 litres per square metre of rainfall. This, along with dewfall from the sea is sufficient. The average annual temperature is 17.3 C and annual hours of sunshine amount to over 3,000. The nearby Atlantic moderates the weather, which is subject two two prevailing winds, the Poniente, a cool damp wind from the west, and the Levante, a hot dry wind from the east. Frost is a rarity, thank goodness. The weather varies a little from area to area. It can be a touch hotter in Jerez being further inland with a little less sea breeze.